Senator Jeff Merkley, Democrat of Oregon, defends the Senate Democrats' vote to weaken filibusters and make it harder for Republicans to block confirmation of the President's nominees for judges and other top posts, on Capitol Hill in Washington on Nov. 21, 2013
J. Scott Applewhite—AP
By Katy Steinmetz

A bill that would make it illegal to discriminate against lesbian, gay, bisexual and transgender people in hiring and firing has been introduced in some form — and then failed to become law — in nearly every Congress for the past two decades. On Wednesday, a champion of that bill, the Employment Non-Discrimination Act (ENDA), will announce that rather than having another go in the upcoming session, he’ll turbocharge it instead.

Democratic Oregon Senator Jeff Merkley will propose a much broader measure aimed at preventing discrimination against LGBT Americans, not just in employment but also with regard to public accommodations, housing, jury service and financial transactions. “It can’t be right that people are thrown out of their rental housing because of their LGBT status or can be denied entry to a movie theater or to a restaurant,” Merkley tells TIME. “That simply is wrong and we need to take on this broader agenda.” He hopes to have a bill, complete with bipartisan co-sponsors, ready for introduction in four to six months.

Despite the popular conception that such protections already exist — one poll put the number at 87% — there is no federal LGBT nondiscrimination law. Twenty-one states currently prohibit discrimination based on sexual orientation and 18 of those, as well as the District of Columbia, also include gender identity. State lawmakers in places like Florida, Virginia and Utah are gearing up to fight for such measures in the coming session, while lawmakers in Michigan are currently in the throes of that debate.

Merkley’s announcement will coincide with the unveiling of a comprehensive report on LGBT discrimination by the D.C.-based think tank Center of American Progress (CAP). Opponents of bills like ENDA, including House Speaker John Boehner, have argued that they’re an “unnecessary” solution in search of a problem. The authors of the report, who spent four months compiling studies and research on the topic, say they hope this “landmark” study will put those objections to rest.

“The reality is that LGBT people face pervasive discrimination in all areas of life throughout the country,” says lead author Sarah McBride. “Marriage equality is an incredibly important issue … At the same time, our country shouldn’t be pacified by that progress. We shouldn’t mistake that progress for victory.” One of the report’s catchiest, most poignant arguments is that in 11 states, a same-sex couple could now get married on Saturday and then be legally fired for being gay on Monday morning.

The report, titled “We the People,” is packed with statistics to arm lawmakers in arguing for the passage of nondiscrimination laws: in the realm of employment, up to 28% of lesbian, gay and bisexual people report not getting a promotion because of their sexual orientation; and 47% of transgender workers say they’ve been fired, not hired or denied a promotion because of their gender identity. Gay men may make one-third less than heterosexual men working similar jobs, the report adds, and the rate of poverty experienced by transgender people is nearly four times that of the general population.

Arguments over nondiscrimination bills often get heated when it comes to public accommodations — shorthand for the businesses and services available to the public. The proverbial scenario (based in reality) has become a gay couple who goes to a baker for a wedding cake and is turned down because a shop owner’s religious beliefs include opposition to gay marriage. Under nondiscrimination laws, such shop owners could be subject to legal penalties, and Merkley says that’s how it should be. “If you choose to be the proprietor of a restaurant, you should be expected to operate that restaurant in a fashion that does not embrace discrimination,” he says. Lawmakers in places like Kansas have disagreed with that notion and attempted to protect such business owners from liability.

The CAP report reveals that up to 27% of LGBT consumers have experienced “inappropriate treatment” or hostility in a place of public accommodation, while 6% have been denied service outright. Up to 70% of transgender people report experiencing some form of harassment when trying to use a public restroom, which is another hot-button area and has led state lawmakers to propose bills mandating that people only use the restroom that aligns with the sex on their birth certificate.

In 2013, ENDA reached a historic milestone, passing the Senate in a bipartisan vote 64-32. Though the House did not take up the bill, Merkley says it helped propel President Barack Obama to issue an executive order in June that created LGBT nondiscrimination protections for roughly 28 million federal contractors and employees. “The sky didn’t fall,” Merkley says. “This is a positive thing. It’s positive for the employers. It’s certainly positive for the individuals involved. It’s certainly positive for the overall economy.” Proponents of nondiscrimination bills argue that in order to capitalize on the best possible talent, LGBT workers need to feel welcome and protected no matter the company or state.

The CAP report details discrimination in medical care, homeless shelters, law enforcement, rental housing and myriad other fields. The authors also have to admit that there’s data lacking, in parts where discrimination is treated more as a possibility than a fact. McBride says LGBT people will only file complaints after nondiscrimination laws are in place, while many government forms and medical forms don’t ask questions about sexual orientation or gender identity that would help fill in those gaps.

Some state lawmakers are trying to do their own research. In Virginia, state delegate Marcus Simon is working with advocacy groups to test the rental market, having “same-sex” and “married” couples call and inquire about the same property. Early results, he says, show there is a difference in treatment about 30% of the time. That’s data he’ll use to bolster a LGBT nondiscrimination housing measure he plans to introduce in the coming weeks.

A federal bill like the one Merkley is proposing has several obstacles to overcome. One is finding a way for a Congress with two Republican-controlled chambers to actually take it up. Another is fighting the notion that with the scales tipping so far in favor of same-sex marriage, LGBT Americans have already achieved equal status in all spheres. Lawmakers and LGBT rights advocates argue that the legalization of marriage will lead to more people being public about their sexual orientation and therefore afford more opportunities for conflict, meaning bakers could only be posed with an order for a same-sex wedding cake if same-sex marriage is legal in the first place. “It is going to become more and more obvious who the LGBT people are, and that’s a good thing,” McBride says. “But it also is going to mean there might be more instances where people are discriminated against.”

McBride acknowledges that getting a comprehensive nondiscrimination bill passed is going to be an “uphill battle.” Advocates like Mara Keisling, executive director of the National Center for Transgender Equality, say there’s no “clear path” to passing ENDA or a broader measure in the next two years, but believe the votes are there if those proposing the bills can get them to the floor.

Merkley, taking a long view, seems cautiously optimistic. He worked to pass a similar measure as a state lawmaker in Oregon and ran on supporting same-sex marriage in 2008 when it was legal in only two states. “No one imagined that within this six-year span that I’ve been in the Senate, my first term in the Senate, that we would be on the verge of ending marriage discrimination across the country, yet here we are,” he says. “It’s very important to recognize how fast the world is changing, and another two years will bring additional changes as well, as people come to terms and understand this discrimination is wrong and it needs to end.” 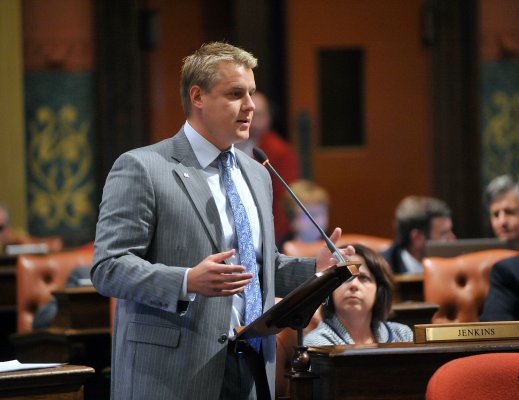 Meet the Republican Who Lost His Election Fighting for LGBT Rights
Next Up: Editor's Pick