If there is an equivalent in today’s TV business to the Mongol horde and its cavalry, it may well be Netflix and its algorithms. Not only has the streaming service’s recommendation engine threatened long-standing TV empires and conquered our video habits by sending us from binge-watch to binge-watch–“If you like this, you might like this”–but also, so the company says, it has allowed Netflix to use its copious data to precision-target an audience for its original shows.

Marco Polo (first season debuts online Friday), the lush drama set in the 13th-century court of Kublai Khan, feels less like precision targeting than a flurry of wildly fired arrows, the scattershot, overstuffed result of a “You Might Like…” algorithm run amok. If you like Game of Thrones, and historical drama, and pay-cable softcore, and martial arts movies (like Crouching Tiger, Hidden Dragon, whose sequel Netflix is also making)–and you want them crammed together, narrative sense be damned–you might like this gorgeous but ludicrous saga.

The series begins with Italian explorer Marco (Lorenzo Richelmy) being left by his merchant father as a gift/servant/hostage for the Khan (Benedict Wong), in hopes of winning access to the Silk Road. Kublai rules a massive empire, but still has unfinished business: the holdout remnants of the Chinese Song dynasty, as well as fellow warlords who fear that conquest has softened the Mongol out of Genghis’ grandson. The Khan sees the quick-witted “Latin” Marco as a useful scout and spy, dispatching him on reconnaissance missions among enemies and frenemies.

Marco is the protagonist only in name; Richelmy is too bland to be more than the handsome camera through which we explore the empire. The imposing Wong, on the other hand, could be the show’s compelling star–a Mongol Al Swearengen–if the series didn’t make him such a growling B-movie tyrant. Early, he’s challenged as to whether he wants to be a Mongol or Chinese ruler. “Emperor of Mongolia, Emperor of China,” he roars, “I will be Emperor of the world!“–and impales a map with his sword. It’s a mission statement for the series, if that mission is to make you laugh unintentionally.

Mission accomplished, repeatedly. Mind you, this is no amateur production. Filmed in Kazakhstan, Malaysia and Venice, Marco Polo looks like it took the riches of east and west to make. (Reports put the season’s price tag at $90 million.) The vistas are stupendous, the sets and costumes gorgeous (and purportedly researched in detail). This would be a great show to watch on a new giant-screen TV you’re getting for Christmas.

And even more so if the sound doesn’t work. Marco Polo quickly becomes a travelogue of pulp clichés: the oily Song chancellor intoning proverbs about “the strike of the mantis break[ing] the back of the cricket”; the concubine-spy (Olivia Cheng) who leaps up fully nude in slo-mo to take down two armored soldiers in her bedchamber, as if in a Rated-Adults-Only video game; and Hundred Eyes (Tom Wu) the sightless martial-arts master who trains Marco with a stream of listen-carefully-grasshopper nuggets–“Untrue by an inch, untrue by a mile” and “Of the yin and the yang, you have an abundance of yang.”

The series’ problem, too, is how badly it balances its contrasts. Making Marco Polo dumb fun would be just as legitimate as making it weighty historical realism. But the show tries to be both (sort of, though producers freely admit to playing with facts and the timeline), lurching between modes without warning. Sometimes it’s a study of court intrigue, as when we see the Song leaders riven between diehards who want to fight the Khan and those who would sue for peace. Other times, it’s like someone watched the most caricatured Dothraki scenes in the first season of Game of Thrones and asked, “Could we have a show of just this?” Then there’s the obligatory sex, worked in a gracefully as pop-up ads; an orgy montage in the pilot, which intercuts naked, red-lit courtesans with images of Hundred Eyes kung-fu-posing with a cobra, is Orientalist hoohah as pure as the spun silk of distant Cathay.

You can’t say Marco Polo isn’t committed to spectacle and popcorn entertainment, and that may make it a hit worth its price tag. But it reminds me of the Simpsons episode in which Homer gets to design a car that has every feature he wants, and ends up with an expensive monstrosity that includes bubble domes, multiple horns and shag carpeting. It may be that Netflix really knows just what we want. With Marco Polo, it’s giving it to us good and hard. 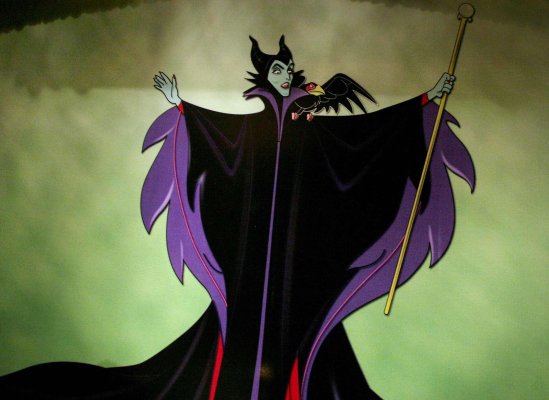 Ursula, Maleficent and Cruella de Vil Come to Once Upon a Time
Next Up: Editor's Pick