The Best iPhone Apps You Should Download This Week

A woman checks the iPhone 6, on the day of its launch at the Apple Store Opera on September 19, 2014, in Paris, France.
Chesnot—Getty Images
By Alexander Aciman

It seems like hundreds of new iPhone apps pop up every week, but which ones should you bother trying? We explored the App Store and found five apps actually worth downloading.

Backed by Skype’s co-founder, Wire combines social networking with basic telecommunication. You can place calls through the app as well as send text messages, but Wire also allows users to share photos and clips from YouTube, as well as link the app to their desktop.

Although video chat is not yet offered on Wire, it seems logical that a marriage with Skype or another video conference client is around the corner. Think of wire as an intelligent, practical version of WUPHF from The Office.

Wire is available free in the App Store.

Snipboard is more or less exactly what it sounds like: A placeholder for the iPhone’s lack of an autocomplete function. The app allows you to copy frequently-used bits of text—from an address for mobile shopping to an email template you end up typing out several times a day—and lets you paste it into other apps. Snipboard is used as a keyboard extension in your text box (sort of like emoji).

Snipboard is available free in the App Store.

A popular “little-known fact” about Tom Hanks is that he is obsessed with typewriters. From this fascination came his typewriter app, “Hanx,” for iPad. Recently released for iPhone, however, the app is as fun as it is useless. It allows users to take notes as the app plunks out each letter, imitating the sound of a typewriter.

The documents can then be shared and emailed around to contacts. Files can even be turned into PDFs. Hanx can even be used in other apps, like iPhone’s Notes app. It makes tedious digital chores a lot less tedious. And who can resist the charm of an old-school typewriter and Tom Hanks?

Hanx Writer is available free in the App Store.

Although Bop.fm launched as a website not long ago, the new iOS app brings another dimension to the music streaming client. It combines Spotify, YouTube, and SoundCloud, among others, into a single app.

With minimal ads, Bop does a great job of creating an easy-to-use app that, surprisingly, doesn’t look like the Clown Car of different apps that it truly is. You’re presented with one, streamlined interface. So, in short, Taylor Swift may have pulled out of Spotify, but you can still stream her music as though she hadn’t.

Bop.fm is available free in the App Store.

Although FourSquare’s most recent update took the app from the check-in game that it was for so many years to a more finely-tuned recommendation app, Hoods takes that information to yet another step. It can identify which neighborhood of a city you’ve entered (a function even offered in your notification center), and boils down info from FourSquare to inform users which activities are most popular in that particular neighborhood. 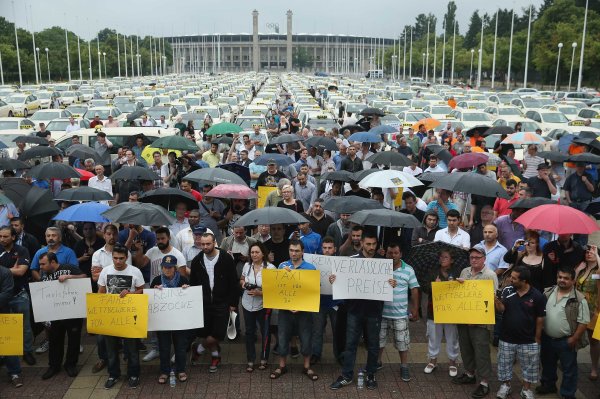 See Uber Protests From Around the World
Next Up: Editor's Pick