Bill Clinton, the 42nd President of the United States and founder of the Clinton Foundation, will be the featured speaker and among the dignitaries that will be attending a gala on Tuesday night to honor the 2014 Sports Illustrated Sportsman of the Year, San Francisco Giants pitcher Madison Bumgarner.

Bumgarner will be honored on Tuesday in New York City during a celebration that includes a tribute to Mo’ne Davis, the 2014 Sports Illustrated Kids Sportskid of the Year, and Clinton’s close friend, Magic Johnson, the Sportsman Legacy Award winner.

NBA Commissioner Adam Silver and incoming MLB Commissioner Rob Manfred will also be speaking at the event. Silver will be presenting the Legacy award to Johnson and Bumgarner will receive his award from Manfred.

Whether hosting championship teams at the White House or hosting the Humana Challenge in conjunction with the PGA as a private citizen, Clinton has a long, familiar history with sports. He even appeared on the cover of the March 21, 1994 issue of Sports lllustrated with the title, “Whooo, Pig Sooey,” as his beloved Arkansas Razorbacks men’s basketball team began its run in the NCAA tournament, eventually winning the national championship with a thrilling victory over Duke.

Clinton has taken on some social issues in sports as well, praising former NBA player Jason Collins after he became the first openly gay athlete to come out in an May 2013 issue of SI.

Since leaving office in 2001, President Clinton and his Foundation have worked to improve global health, increase opportunity for women and girls, reduce childhood obesity and preventable disease, create economic opportunity and growth and help communities address the effects of climate change all over the world.

The ceremony will be hosted by former NFL quarterback Boomer Esiason. 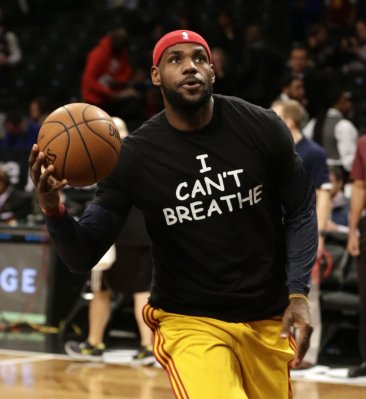 NBA Won't Fine Players for 'I Can't Breathe' T-shirts
Next Up: Editor's Pick