Cleveland Cavaliers forward LeBron James warms up before an NBA basketball game against the Brooklyn Nets at the Barclays Center on Dec. 8, 2014, in New York.
Jason Szenes—EPA
By Sports Illustrated / Scooby Axson

The NBA will not fine players for wearing “I Can’t Breathe” t-shirts in honor of a Staten Island man who died after police placed him a chokehold in July, reports ESPN’s Jeremy Schaap.

Chicago Bulls guard Derrick Rose wore an “I Can’t Breathe” shirt on Saturday during warm-ups before Chicago’s game against the Golden State Warriors to honor Eric Garner. Thousands across the country have protested after a grand jury decided last Wednesday not to indict the officer who put the chokehold on Garner.

Outside of the Barclays Center before the game, about 200 protesters chanted “I Can’t Breathe!” and “No justice! No peace! No racist police!”

“I respect Derrick Rose and all of our players for voicing their personal views on important issues but my preference would be for players to abide by our on-court attire rules,” NBA Commissioner Adam Silver said.

“You hear the slogan ‘NBA cares’ and it’s more evident than now to show some support,” Garnett said. “Obviously we’re not on the front line of this movement, but I think it’s important being from these communities and supporting these communities.” 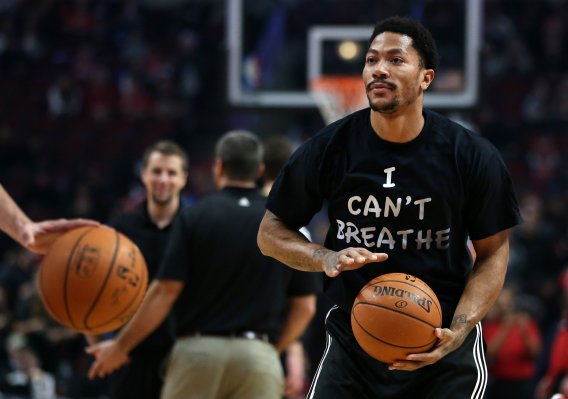