Hong Kong's Remaining Protest Sites Are About to Be Cleared

A man is silhouetted walking past tents on a flyover in the Admiralty district of Hong Kong on Dec. 9, 2014. Pro-democracy demonstrators in Hong Kong are bracing for police to clear part of their main protest site in two days following a court order to reopen roads that have been occupied for more than two months
Bloomberg/Getty Images
By Elizabeth Barber / Hong Kong

Authorities in Hong Kong are set to clear pro-democracy protesters’ main encampment in Admiralty district this week, hoping to put an effective end to more than two months of street occupations.

An official order made by Hong Kong’s High Court to largely clear the area went into effect after being posted in local newspapers on Tuesday. It was made when a local bus company won an injunction against the protesters, who are demanding free elections for China’s most international city.

The order applies to most — but not all — of the protesters’ camp on major roads abutting the Hong Kong government’s colossal central offices and the headquarters of the People’s Liberation Army. But it is widely expected that hundreds if not thousands of police will take advantage of the order to remove the entire camp, as well as clear a smaller protest site in the nearby Causeway Bay district.

“Obviously some people will still be there no matter what,” Paul Tse, a lawyer representing the bus company, tells TIME. “But we are trying to appeal to them to comply with the order.”

A similar injunction, also brought by local transport companies calling foul over the traffic disruption, brought an end to a third protest encampment in Mong Kok — a blue-collar neighborhood, and shopping hub for all things advertised in neon, located in the heart of the Kowloon peninsula. Police and municipal workers met little resistance in methodically tearing down the barricades and rows of tents, though protesters have returned to the neighborhood on recent nights, marching down the sidewalks and raising their hands in Hunger Games–inspired salutes.

Student protest leader Joshua Wong has urged demonstrators to remain similarly peaceful during the expected clearance of the Admiralty camp. One of TIME’s Most Influential Teens for 2014, Wong recently ended a 108-hour hunger strike over the government’s refusal to hold talks.

Since late September, the main protest encampment has been a community of impressive orderliness, where demonstrators have staged concerts and rallies, outfitted their tents against unruly weather, and repurposed almost all available surfaces into galleries for protest art. Momentum for the pro-democracy cause has been sustained by a never-ending supply of resonant symbols, chiefly umbrellas, which protesters have used to defend themselves from pepper spray, and which have now become a common motif of paintings and sculptures.

At the same time, much of the tent city’s original brio has been sapped by the more than two months of waiting to see tangible results. Protesters are seeking the right to vote for the head of the city’s government, known as the chief executive, without the central government in Beijing screening the candidates through a pro-establishment committee.

Hong Kong’s current chief executive, Leung Chun-ying, has ruled out dialogue with protest leaders and frequently reiterated that elections in this former British colony must be in accordance with the Basic Law, the city’s miniconstitution, promulgated upon its return to Chinese sovereignty in 1997.

The student groups at the forefront of the protests, the Hong Kong Federation of Students and Scholarism, recently weighed, but decided against, retreating from the Admiralty camp, where numbers have dwindled markedly in recent days. 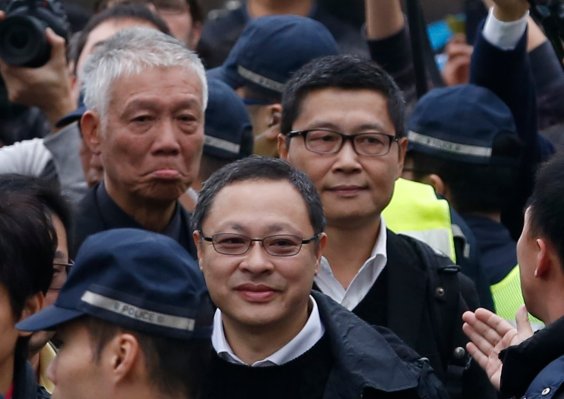