President Barack Obama walks toward Marine One while departing the White House on Nov. 25, 2014 in Washington, DC.
Mark Wilson—Getty Images
By Maya Rhodan

President Obama, who started his career in politics as a community organizer, said Monday that protests in the wake of grand jury decisions not to indict white police officers in the deaths of unarmed black men are a necessary step.

“As long as they’re peaceful, I think they’re necessary,” Obama said during an interview that aired on BET Monday. “When they turn violent then they turn counterproductive.”

“Power concedes nothing without a fight, that’s true , but it’s also true that a country’s conscious has to be triggered by some inconvenience,” Obama said. “The value of peaceful protests, activism … is it reminds the society this is not yet done.”

Obama’s statements echo sentiments of Attorney General Eric Holder, who said in an interview with TIME that this could be a seminal moment.

Two recent grand jury decisions not to indict police officers Darren Wilson in Ferguson, Mo., and officer Daniel Pantaleo in New York on top of several additional shootings of unarmed black men and boys over the past few months have led to widespread protest across the country. The majority of the protests have been peaceful, though unrest in Ferguson led to violence in late November.

Throughout the interview, Obama touted initiatives his administration has launched to improve the nation’s approach to criminal justice as well as better relationships between communities of color and law enforcement agencies. In early December, Obama announced the launch of a Task Force on 21st Century Policing, designed to build trust within communities.

Obama said Monday he feels an “enormous amount” of responsibility for making an impact amid unrest in Ferguson, New York City and the disconnect some communities feel between themselves and police. Obama said his personal experiences largely shape that feeling of responsibility, which he was reminded of during a meeting with young leaders in the protests last week.

“Part of the reason I got into politics was to figure out how can I bridge some of those gaps in understanding so that the country realizes this not just a black problem or a brown problem. This is an American problem,” Obama said.

Obama said he’s been “explicit” about his concerns regarding minority community interactions with police, but says he can’t “put his thumb on the scale of justice.” The Department of Justice and his administration, he says takes the issue seriously, with federal investigations currently underway in both Ferguson and New York. He added that solving the systemic problems will not happen overnight, but Americans should understand that progress has been made.

“As painful as these incidents are, We can’t equate what’s happening now to what happened 50 years ago,” Obama said.

–With reporting by Zeke Miller 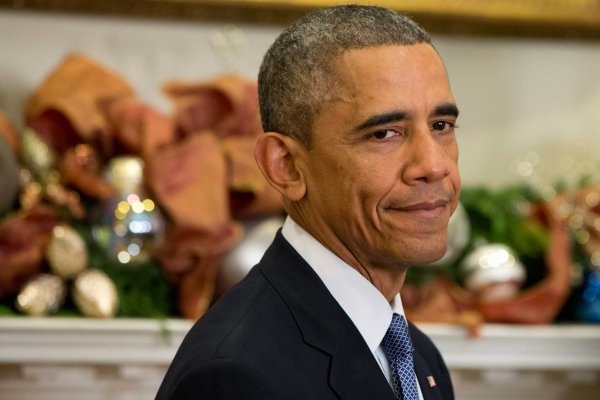 Obama Visits Hospital For Sore Throat
Next Up: Editor's Pick