Where Are All Those Freed Guantanamo Detainees Now?

Moazzam Begg, a Pakistani-British man who spent three years in Guantanamo between 2002 and 2005, pictured in London, Oct. 1, 2014.
Rob Stothard—Getty Images
By Noah Rayman

Over the dozen years since the Guantanamo Bay detention camp opened, more than 630 people have been allowed to leave the controversial U.S. prison in Cuba.

Over the weekend, six more inmates joined their ranks when they were moved to Uruguay as President Barack Obama continued to attempt to fulfill his long-held promise of shuttering the prison. The latest transfers reduced the number of inmates to 136, the lowest since the prison’s earliest days.

Here’s a snapshot of some of the countries that harbor former Gitmo detainees:

Moazzam Begg, one of 14 detainees transferred to Britain, is a British citizen of Pakistani descent who was detained in Pakistan in 2002 as a suspected al-Qaeda member and sent to Guantanamo for three years. He was released and dispatched to Britain in 2005, where he became a public speaker and activist; he was arrested again last February and charged with funding terrorism in Syria. Those charges were dropped in October.

Fawzi al-Odah was repatriated to Kuwait in November after nearly 13 years without a trial, marking the first of a recent wave of transfers from Guantanamo. As part of the agreement with Kuwait, which has taken in 11 former detainees, al-Odah will remain in custody for a yearlong rehabilitation program.

Lakhdar Boumediene, an Algerian who was detained while living in Bosnia in 2001, spent seven years in Guantanamo. Boumediene, who had been working for the Muslim branch of the Red Cross, went on a two-year hunger strike opposing his detention, and his case was brought to the Supreme Court, which issued a seminal decision in 2008 that Boumediene and other Guantanamo prisoners had a right to use the writ of habeas corpus under the U.S. Constitution. In the wake of that decision, he was ordered released — and in 2009 became one of nine former detainees who have been transferred to France, where he settled with his wife and three children.

Lahcen Ikassrien was handed over to Spanish custody in 2005 after the alleged Taliban fighter spent four years in Guantanamo; Spain soon released him for lack of evidence. In June, he was among nine people detained in a police sting on a network of jihadist recruiters.

Six Guantanamo inmates have been transferred to Georgia since 2010, including three Yemenis who were resettled there last month (two others were sent to Slovakia).

Six inmates have been transferred to Qatar, including one Qatari citizen in 2008 and five Afghan citizens who were released in exchange for U.S. Army Sgt. Bowe Bergdahl earlier this year in a Qatar-brokered deal with the Taliban. As part of the agreement, Qatar said it would impose a one-year travel ban on the five men.

In 2009, four Chinese Muslim men who had spent seven years in the U.S. prison were sent to Bermuda. The men, members of the restive Uighur community from Western China, were among the 22 Uighurs who had been detained in the wake of the U.S. invasion of Afghanistan but were later determined not have been enemy combatants. China called for their repatriation–which would have likely led to continued imprisonment–but then Bermuda Prime Minister Ewart Brown negotiated their release. Yet five years after they arrived in Bermuda, activists said that the men still lacked passports and were effectively stranded on the island.

The six men now in Uruguay, including four Syrians, a Tunisian, and a Palestinian, are expected to learn Spanish and adapt to new lives in Uruguay after more than 12 years in Guantanamo. They had been approved for release in 2009 but the U.S. could not find a destination for them until Uruguayan President Jose Mujica agreed to accept them on humanitarian grounds. “It is difficult for me to express how grateful I am for the immense trust that you, the Uruguayan people, placed in me and the other prisoners when you opened the doors of your country to us,” Abedlhadi Omar Faraj, one of the Syrian former inmates, said in a statement released by his attorney. 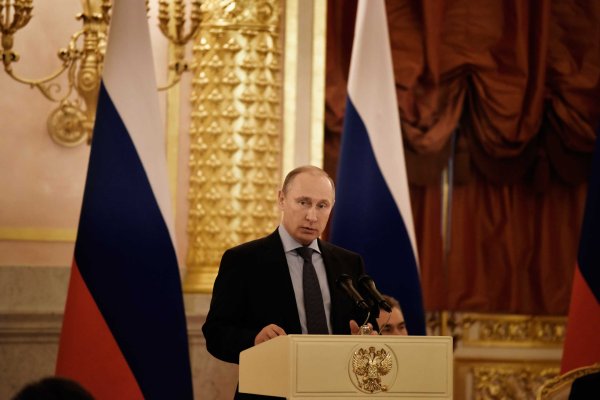 Putin Self-Censors on Ukraine
Next Up: Editor's Pick