Princess Kate followed in the footsteps of another famous princess when she visited Harlem on Monday.

Wearing a black coat by the luxury line Goat, Kate, 32, echoed Princess Diana in reaching out to meet with children from disadvantaged backgrounds in the New York area. She was greeted by Chirlane McCray, first lady of New York City, as she learned about the Northside Center for Child Development.

For the 200 well-wishers who gathered outside for a glimpse of the royal guest, the visit brought parallels of her husband William’s late mother.

Jessica Keim, 33, was across the street with her two little “princesses,” daughters Monterey, 3, and Carmel, 8 weeks. The mom praised Kate for coming to a less well-off part of the city.

“By going to see children, she helps it open up the community even more,” Keim tells PEOPLE. “Diana was such a lovely woman, and Kate is someone from the next era of hope and someone to admire and look up to for the girls.”

Inside, as fans were adjusting to the excitement of catching sight of her, Kate was being shown the work of Northside, which provides programs rich in early childhood behavioral or mental health and education support.

“It’s an inspirational center which provides children from disadvantaged backgrounds the chance to learn, and build their own self esteem from an early age,” an aide says. “This is an issue the duchess is personally very interested in and reflects the work of some of her existing patronages in the U.K., such as Place2Be.”

For social worker Paulina Pinzon from Brick, New Jersey, getting a 13-second iPhone clip of Kate was worth the wait. Pinzon, 29, filmed the princess as she stood across the street from the center.

“You feel you know her,” Pinzon says. “She seems like she could be your friend, she seems so down to earth.”

“We admire her for her presence and how she cares,” says Prinzon’s friend and colleague Amie MacMath, 27. “She’s a role model.”

Adds Pinzon: “We know that both she and Diana are known for their work with hospices and their approach with children.”

And the children in the crowd also love the princess. Lauren and Lindsey Nichols, 16 and 14, respectively, had flown in from Chadon, Ohio, and brought banners reading “Welcome to New York” and “Mini Middletons heart Kate.”

“It’s a dream come true to see her. I know she is tall, but she seemed taller than I thought,” Lauren says. “She brings attention to things like this that maybe lack attention.” 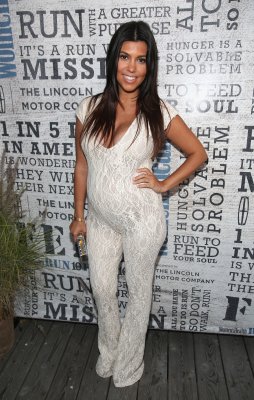 It’ll Be a Boy for Kourtney Kardashian
Next Up: Editor's Pick