McDonald’s has reported declining comparable-store sales across all regions the fast-food chain serves, with a bruising drop reported in the U.S. that signals efforts to regain traction in that market haven’t yet materialized.

The fast-food operator reported a sharp 4.6% drop in comparable sales in the U.S. in November, which the company blamed on “strong competitive activity. Analysts had only expected a 1.9% drop in that region, according to a survey conducted by Consensus Metrix. McDonald’s also reported a 2% drop in Europe and a 4% decline in the Asia/Pacific, Middle East and Africa. Both of those declines were also worse than Wall Street had feared.

Globally, comparable sales decreased 2.2% last month. AsFortune reported earlier this year, analysts have predicted that 2014 will be the first year of negative global same-store sales since 2002. McDonald’s, which plans to turn things around in the U.S. by simplifying its menu and revamping its marketing approach., has reported falling same-store sales for four consecutive quarters in its home market.

Fast-food chains such as McDonald’s are facing pressure in the U.S. and other mature markets as consumers are spending more of their money at fast-casual chains, such as Chipotle and Panera. The rival chains offer menus that consumers perceive to be healthier, as well as fairly quick service that doesn’t require a server. The industry is also challenged by the fact that low-income consumers in the U.S., a group that spends more at fast-food chains, are still facing weak wage growth and poor job prospects. 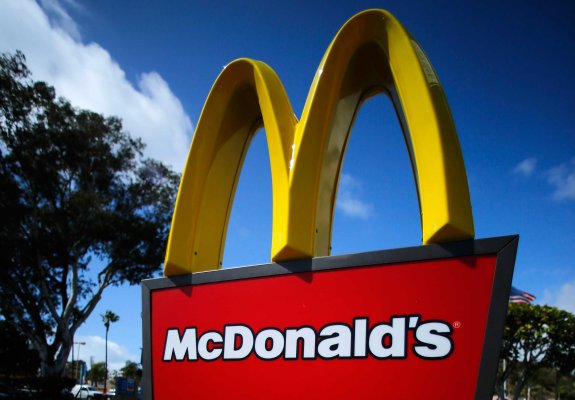 McDonald’s Has a Weird New Burger in the Works
Next Up: Editor's Pick