Zoe Sugg, the British YouTube and blogging star whose novel is at No.9 in the New York Times Young Adult Best Sellers list, has admitted that she did not write the book on her own.

The 24-year old writer, who also uses the name Zoella, has had record sales of her recently published first novel, Girl Online, but the Sunday Times of London revealed that the writing bore similarities to another author, Siobhan Curham.

Sugg first rose to fame with her beauty and make-up tutorials, which she began producing in 2009. It wasn’t long before she was attracting millions of views and fans, many of whom snapped up her print debut. But the news that Sugg — whose first-week book sales eclipsed the first-week sales from the debuts of J.K. Rowling, Dan Brown and EL James — received help writing her book has prompted surprise and even outrage online. Several social media users have called Sugg a “fraud“. As one commenter on Twitter put it: “Ghostwriters should be banned. If you’re not smart enough to write a book, admit it. Don’t take the credit for someone else’s work #zoella.”

Sugg’s publisher Penguin issued a statement on Monday. “The factual accuracy of the matter is simply that Zoe Sugg did not write Girl Online on her own, ” the statement says, “For her first novel, Girl Online, Zoe has worked with an expert editorial team to help her bring to life her characters and experiences in a heartwarming and compelling story.”

Celebrity writers often work with ghostwriters when they publish a memoir or even a novel. The New York Times noted in 2011 how celebrities such as the Kardashians, Nicole “Snooki” Polizzi and Hilary Duff had all published novels, in part because, “Like a branded fragrance or clothing line, the novel — once quaintly considered an artistic endeavor sprung from a single creative voice — has become another piece of merchandise stamped with the name of celebrities, who often pass off the book as their work alone despite the nearly universal involvement of ghostwriters. And the publishing industry has been happy to oblige.”

Though many in publishing and media are aware of how commonplace ghostwritten works are, readers — particularly young readers like Sugg’s fans — might not realize that the blogger had help with her novel. After all, it’s only Sugg’s name that appears on the cover of Girl Online. Yet, in the book’s acknowledgements, Sugg writes, “I want to thank everyone at Penguin for helping me put together my first novel, especially [author and editorial director at Penguin U.K.] Amy Alward and [Young Adult author] Siobhan Curham, who were with me every step of the way.”

It is Curham — who has published more than half a dozen novels under her own name — who has been suggested as the likely ghostwriter for Girl Online. Though Curham did not respond to TIME’s email request for an interview, the Sunday Times‘ story outlined how she wrote a now-deleted blog post in August on what it was like “to write an 80,000-word novel in six weeks.” Many now suspect the post was a reference to Girl Online.

Sugg herself responded to the controversy on Sunday night, saying in a statement posted to Twitter:

Considering that Sugg’s statement was favorited and re-tweeted more than 15,000 times it seems likely that her stable of young fans are sticking by her. That not only bodes well for Girl Online‘s continued sales, but also for the book’s follow-up, which is due out in 2015. Despite the current controversy, it seems unlikely that Zoella will be haunted by the ghostwriter revelation. 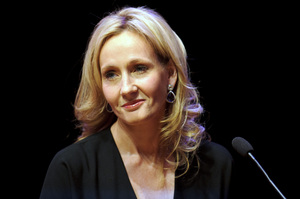 J.K. Rowling Is Writing More Harry Potter for Christmas
Next Up: Editor's Pick