PHOTOS: What’s at Stake in the Marilyn Monroe Auction

As part of its Icons & Idols series, the auction house offered an array of items ranging from James Bond memorabilia and a nude sculpture made by Farrah Fawcett to a slice of Prince William and Kate‘s wedding cake. Among the most spectacular were sales from the “Lost Archives of Marilyn Monroe.”

A love letter from Joe DiMaggio to the screen siren after she said she was divorcing him went for $78,125, while a letter from Arthur Miller to the star pulled in $43,750.

One of the most surprising items was a piece of the 8-tier wedding cake from the 2011 royal wedding, which pulled in $7,500. Silicon Valley entrepreneur Gee Chuang (who founded the online marketplace Listia) took home that treat.

But the biggest ticket item in the sale was the burgundy Caroline Charles coat dress that Princess Diana wore while carrying a young William at the Aberdeen airport – its price was a cool $125,000. 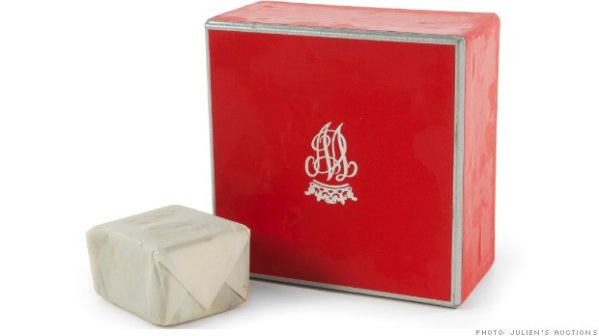