Landon Donovan of the Los Angeles Galaxy looks on during the match against the Seattle Sounders FC during the Western Conference Final at CenturyLink Field on Nov. 30, 2014 in Seattle.
Otto Greule Jr—Getty Images
By Bill Saporito

Major League Soccer will get half of its dream matchup in the final of the MLS Cup on Sunday in Los Angeles. In a fitting sendoff, the most important American soccer player in history, Landon Donovan, will play his last game as a professional when his Los Angeles Galaxy team takes on the New England Revolution.

It’s not a stretch to say MLS wouldn’t be the success it is today without Donovan. Now 32, he became the first American soccer star, and the fact that he actually played most of his career in the U.S. was critical. MLS Commissioner Don Garber credits him with making the league a respectable option for pros. “He was the first guy who said: This is a league I want to get behind,” Garber says.

It would have been fitting if the best European player to ever play in MLS, Thierry Henry, was also in the final, but Henry’s New York Red Bulls got eliminated by the dogged Revs in the semi-final by a 4-3 aggregate score. You don’t get to the final because the script says it would a be nice script. Henry has won everywhere everything else—World Cup, European Cup, Champions League, English, French and Spanish championships—but he leaves U.S. empty handed. C’est la vie, Henry.

But there’s still a good European-American story, here. That would be Jermaine Jones, the driving force behind the resurgent Revs, who at one point posted an eight-game losing streak. Until Jones arrived. This son of an American father and a German mother was born and raised in Germany. After the bulk of his career in Germany’s Bundesliga, Jones, 33, was parceled out to New England this summer. “He is so smart tactically,” Revs coach Jay Heaps says. “He can see the game. There are times when we want him to be a little more aggressive attack wise, or times we need him to close a gap defensively. He understands that better than most.”

Jones’ brand of Teutonic tackling and never-say-die American attitude was one of the great stories of the U.S. National team’s World Cup run. This guy could play middle linebacker for Patriots and there are times on the pitch when he seems to confuse the two. But he is relentless, and a guy who will be critical if New England pulls this one off.

So will Lee Nguyen, the Revs attacking midfielder. A Texan who has played in Holland, Denmark, and Viet Nam, he’s become a fixture in New England. If Nguyen scores or gets an assist, the Revs have a good shot at winning.

That’s going to be difficult because L.A. is just reeking with class. Donovan is a proven pressure player, his last gasp goal against Algeria in the 2006 World Cup being one of the great ones in U.S. history. “We’ve done this before,” Donovan said of the MLS Cup. “We have experienced players and great leadership on the team. We know what it’s all about.”

One of Donovan’s strike partners is the2014 MLS MVP Robbie Keane. The Irishman has a wealth of big club experience (Liverpool, Leeds, Celtic, Tottenham), and is exactly the kind of striker made for games like this: Give him an inch and he’ll kill you. He’s scored more than 250 goals in a career that began in 1997. Unlike Donovan, the 34-year old Keane has no plans to hang up his boots, but he’ll probably miss Donovan. “It’s been one of the best partnerships I’ve had,” said Keane. “If anyone deserves to go out on a high note, it’s him.”

The big winner of the day will be MLS itself. This year, its 19th, the league made certain it would have a 20th and beyond with a $720 million television deal with Fox Sports, ESPN and Univision. Its television ratings took a big jump this season, no doubt helped by the exposure given the game by the World Cup. Franchise values have skyrocketed and two new teams, in New York City and Orlando, will join the league next year. Attendance is up to 19,000 a game on average and sellouts are not uncommon.

That’s a far cry from when Donovan started in MLS. “I could have never in a million years imagined playing against Thierry Henry in brand new stadiums,” he said. Or playing with stars like Keane, or David Beckham. “If you had said those things in 2001, I would have said ‘you’re absolutely crazy.’”

You’ve got to applaud Donovan for playing his part in that. The next task is to make the quality of the play world class, beyond a couple of marquee players. There’s still a lot of work to do on that count. But given the class of the players who will be on the field Sunday, expect a match that lives up to a title game. 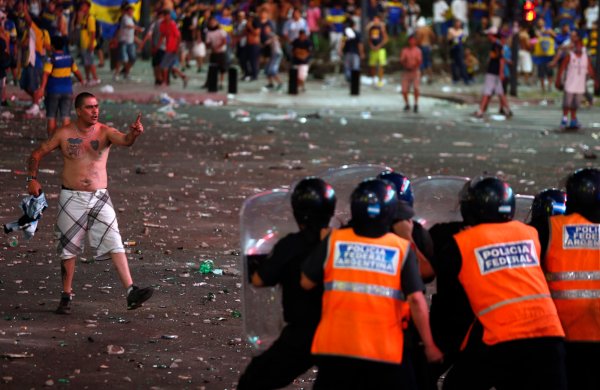 Argentinian Soccer Player Killed In Attack
Next Up: Editor's Pick