Why Farmed Salmon Is Losing Its Omega-3 Edge

When Amanda West Reade was pregnant with her now two-year-old son, she started eating farmed salmon. As a vegetarian, she knew that getting enough protein, omega-3s, and folic acid to boost her growing baby’s development might be tricky.

“My doctor listed a few meal ideas and I thought I could handle the salmon,” says Reade. “She said to lean more towards farmed salmon because it was higher in omega-3s.”

Reade followed her doctor’s advice and added farmed salmon to her diet three times a week. “It became something I really craved,” she says.

Long-chain omega-3 fatty acids are good for the brain and eye development of growing babies and salmon has been a go-to meal for those looking for a reliable a low-mercury fish source. When it comes to omega-3 fatty acids, the message is the clear: All salmon is a good choice.

But that might soon change. A piece of farmed salmon today may contain as little as half the amount of omega-3s than it did a decade ago.

This is according to the International Fishmeal and Fish Oil Organization (IFFO), a trade group that represents stakeholders in the marine ingredient industry. The group is sounding the alarm over declining levels of omega-3s in farmed salmon.

“A 2008 paper showed that for every 3.5 ounces of farmed salmon you ate, you would get about 2-2.5 grams of EPA [eicosapentaenoic acid] and DHA [docosahexaenoic acid], and that was down from 3 grams three years earlier. Since 2008, it has come down further,” says Andrew Jackson, technical director at IFFO. “You’re probably only going to get 1.5 grams per serving now.”

It’s a problem the industry has been aware of for several years.

“As the producers of fish oil, we thought it would be a good idea to inform everybody. Some retailers put it on the package. Some don’t,” says Jackson. “We’re pushing for informed decision making.”

Steady pressure on the farmed salmon industry from environmentalists has pushed producers to become more eco-friendly, including efforts to reduce the quantity of forage fish like anchovy, sardines or menhaden in their feed. These small wild fish are ground up and made into fish oil and fishmeal—a critical part of the farmed salmon’s diet. And while they are the very source of the omega-3s consumers seek, most consumers choose larger fish like salmon and tuna, rather than eating sardines themselves.

Worldwide, forage fish stocks continue to shoulder enormous pressure, and environmental groups have been calling for better management of these tiny but important fish. Dwindling numbers have also led the price of fishmeal to rise by more than doubled in recent years.

In October, Peru, the largest producer of fishmeal, shut down its anchovy fishery because the stocks simply weren’t there. Weeks later, traders saw prices soar as high as a dizzying $2,370 a metric ton—66 percent higher than prices at the year’s start.

It’s understandable that salmon farmers are racing to find a replacement for forage fish. Soy, algae, barley protein, insects, trimmings from seafood processing, and even mixed nut meal from California’s pistachio and almond industry are all appearing in feed.

Verlasso, a joint venture between ag-chemical giant DuPont and farmed-salmon giant AquaChile, has also developed a genetically modified yeast which carries genes from an omega-3 producing algae and has dramatically reduced the company’s reliance on forage fish as a component of the salmon’s diet.

“I’ve never seen so much development for aquaculture,” says Rick Barrows, research nutritionist at U.S. Department of Agriculture’s Agricultural Research Service. “There are a lot of ingredients being evaluated and developed. The whole question is, can they be scalable?”

So far, the alternatives are expensive, and most don’t solve the problem of how to keep the omega-3s in farmed salmon.

“There’s a lot of research on what we can do to address the fish oil gap. Unfortunately there’s not a good answer to that,” says Steven Hart, executive director, Soy Aquaculture Alliance. One solution is what’s called a “finishing feed.” Producers use vegetable oil for most of the salmon’s life, and then “switch it to fishmeal to keep the omega-3 levels up.”

The Dietary Guidelines Advisory Committee also have their eyes on declining levels of omega-3s in farmed salmon as they work on the 2015 recommendations for Americans.

J. Thomas Brenna, professor of human nutrition, chemistry and food science, Cornell University and committee member, says the committee plans to comment on in the change in its upcoming report to the secretaries of HHS and of agriculture. “While changes in feeds is certainly an issue, recent scientific studies do not appear to support the view that omega-3 in farmed salmon is lower than in wild salmon.”

Even if today’s farmed salmon carries far less omega-3 fatty acids than it once did, it’s now on par with wild salmon, and still packs more than species like tilapia, lobster or catfish.

So how is a consumer to know if their salmon dinner is indeed rich with omega-3s? Don’t bother looking at the label.

“Omega-3s are not labeled, so consumers can’t possibly have any idea how much farmed fish contain,” says Marion Nestle, author and New York University professor of nutrition, food studies, and public health. Levels can vary from farm to farm, depending on in-house feed recipes and the time of year salmon are harvested.

“The fact is, despite any increase in plant oil ingredients in salmon feed, it still contains very high levels of omega-3s,” says Gibbons.

That’s true for now, but with a finite supply of forage fish, continued worldwide growth in aquaculture, and the absence of a holy-grail, keeping our farmed fish brimming with omega-3s could be a persistent problem. But that also assumes that farmed fish will continue to be our primary source of omega-3s.

“Should [farmed] fish have to carry the omega-3 burden?” Barrows asks.

It’s an important question to consider. As Nestle points out, “They can also be synthesized in the body from shorter chain fatty acids widely available in plants, but slowly,” says Nestle. “So eating vegetables is a slow but steady way to get omega-3s.” 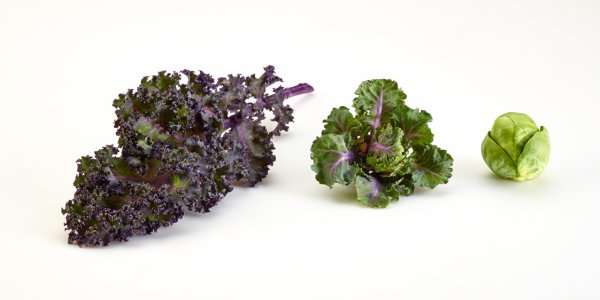 Kalettes: A Brand-New Veggie You Should Know About
Next Up: Editor's Pick