The True Story Behind Wild

The new Reese Witherspoon movie Wild faced a major challenge as it headed to the big screen. In the popular memoir of the same name, author Cheryl Strayed hikes the Pacific Crest Trail in hopes of finding ways to cope her mother’s death, her experimentation with heroin and her divorce. The then-26-year-old Strayed spends most of the book traversing the trail alone and, though flashback scenes and pit stops on her journey provide some material for action and drama, the book mainly consists of Strayed’s own thoughts—material that’s hard to translate into a screenplay.

Still, the film closely parallels the book, mirroring Strayed’s bleak back story and her uplifting journey. Here’s what was truth, as described by the memoir, and what was changed for the movie.

Warning: spoilers follow for Wild, both the book and the movie.

Cheryl’s last phone call before starting her hike was to her ex-husband, Paul

In the film, Cheryl calls her newly ex-husband Paul before she sets off on her journey, probably so that audience members will become familiar with Paul (who appears in many flashbacks throughout the movie) early on. In reality, Cheryl resisted the urge to call her ex the night before she began her hike. Cheryl fell into using heroin for a time between her mother’s death and her hike four years later. Paul disapproved from the habit and helped Cheryl quit, but she used again shortly before the hike. She feared that if she called Paul he would somehow divine that she had done drugs just days before.

Cheryl’s only family was her mother and brother

The movie cuts out a few important people in Cheryl’s real life. In the film, Cheryl has only one sibling, her younger brother Leif. In reality, Cheryl also had an older sister, Karen. The movie also removes their mother’s second husband, Eddie. Eddie is a father figure to Cheryl and her siblings when they are young. (Their biological father was abusive and Cheryl loses touch with him after her mother files for divorce.) Cheryl and Eddie grew particularly close during her mother’s sickness, but after she passed, Eddie remarried and grew distant.

Cheryl and Paul got matching tattoos when they divorced

To honor their connection to each other, the two got tattoos of horses on their arms. Their divorce (as reflected in the film) is largely amicable. Cheryl blames marrying too young and her own infidelity for their failed marriage.

Cheryl threw her boot off a cliff

Cheryl’s boots did plague her throughout her hike, taking six of her toenails because they were too small. In the film, Cheryl finds out that REI will ship her new boots for free at one of her first stops on the trail. In reality, she heard about the satisfaction guaranteed policy much later when the damage was already done to her feet.

One of her boots did tumble down a cliff, allowing her to chuck the other one after it, screaming profanities as she did. She walked in taped-together sandals to her next rest stop, where her boots were to be delivered. However, her problems did not end there: The boots were not shipped as quickly as she expected, and she was forced to hike on sandals to yet another stop before finally getting her new shoes.

She was interviewed for the Hobo Times

A reporter really did stop Cheryl and talk to her for a piece in the Hobo Times. (Though the book never mentions whether the story was actually published and picked up by Harper’s, as the journalist suggested it would be.) The interview forces Cheryl to question whether she is, technically speaking, homeless, since she is traveling alone and doesn’t have a house to call her own. The hobo care-package she receives is also real and did indeed include a beer.

Cheryl got pregnant while experimenting with heroin

Another character cut out from the movie is Joe, Cheryl’s boyfriend who gets her hooked on heroin. Cheryl begins experimenting with the drug while she and Paul are separated but not yet divorced. As shown in the movie, Paul does drive across the country to find Cheryl when a mutual friend tells him that his wife has been using drugs. Cheryl consents to leave with him only after she is threatened by a man with a knife.

In the movie, Cheryl says she does not know who got her pregnant. In the book, it was certainly Joe. After getting an abortion and setting out on her hike, Cheryl receives several letters from Joe on the trail promising to get better and expressing a desire to be her boyfriend. Cheryl does not find out whether Joe actually goes to rehab.

She walked out of her therapy sessions

Much of Cheryl’s internal monologue during her therapy sessions is made into dialogue with her therapist in the movie. In fact, Cheryl saw a therapist consistently, not just for one session.

Cheryl missed her mother’s death while finding her brother

In real life, Leif disappeared while his mother was in the hospital. Cheryl spent the night before her mother died trying to track him down. When she finally found him and the two visited the hospital the next morning, their mother had already been dead for an hour. A nurse, thinking they had already been informed, approached them and told them they put ice on their mother’s eyes so she could donate her corneas.

One of the most heart-wrenching scenes in the book is when Cheryl and Leif are forced to put down their mother’s sick horse. The horse grew weak after Eddie neglected it following the death of Cheryl’s mother. Cheryl asks Eddie to mercy-kill the horse, but he doesn’t. Cheryl then says Leif must shoot the animal. The horse does not die from the first shot, but to Cheryl’s dismay must be shot multiple times and dies slowly. In the book, Cheryl often dreams of her mother begging to Cheryl kill her and of her mother’s horse offering a bouquet of flowers to Cheryl, forgiving her for shooting him. 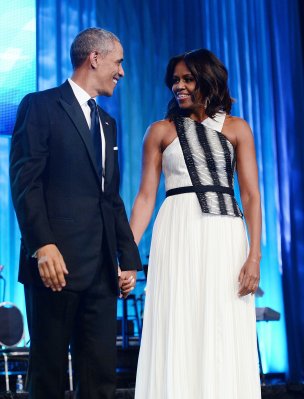 Get Ready for a Movie About the Obamas' First Date
Next Up: Editor's Pick