The 2015 Grammy Nominations Had a Few Surprises After All

The record of the year competition? Meghan Trainor is all about that race.

Trainor, the 20-year old star behind this summer’s surprise hit “All About That Bass,” is one of four acts competing in a surprisingly pop-driven field for one of the Grammys’ top prizes, honoring a song’s performance and production. She’s joined by Iggy Azalea (with Charli XCX) for “Fancy,” Sia for “Chandelier,” Taylor Swift for “Shake It Off,” and Sam Smith for “Stay With Me (Darkchild Version).” Nominations in several categories have already been announced, and the album of the year prize is set to be announced tonight.

All five of the record of the year nominees were major chart hits, marking a continuation of last year’s drawing from chart-toppers like “Get Lucky” and “Blurred Lines.” Before last year’s pop buffet, slightly lower-fi and more rock-driven acts including Bon Iver and the Black Keys managed to get into the race. But it’s the least aggressively poppy of the nominees that has to be considered the frontrunner: Sam Smith has been collecting nominations throughout the announcement period, including best new artist (alongside Iggy Azalea, Bastille, HAIM, and Brandy Clark) and best pop solo performance (alongside John Legend for “All of Me,” Sia for “Chandelier,” Swift for “Shake It Off,” and Pharrell Williams for “Happy”).

Smith’s strength across the nomination field portends a big night, not least because he’s in the mold of recent British R&B-inflected vocalists Amy Winehouse and Adele, both of whom dominated the Grammys. He at least can be considered a frontrunner in the most hilarious category announced so far, best pop vocal album. The field was stretched to six to ensure there’d be room for everyone from Ed Sheeran and Coldplay (the Timberlake-alike x and the breakup record Ghost Stories) to Ariana Grande and Katy Perry (the wildly mixed bags My Everything and Prism) to first-time nominee Miley Cyrus (Bangerz).

It’s fairly surprising, given the pop-driven bent of the record of the year nominees, that “Happy” didn’t find its way in — or, given her historical strength with the awards-giving body, that Beyoncé showed vulnerability by not finding her way into the pop solo performance category for “Pretty Hurts,” the song she submitted. (She has been nominated for best urban contemporary album alongside four artists not named Beyoncé.)

But perhaps the biggest surprise, so far, is that all five of the best new artist nominees, people in a category that famously plays by its own rules, are only on their first album. 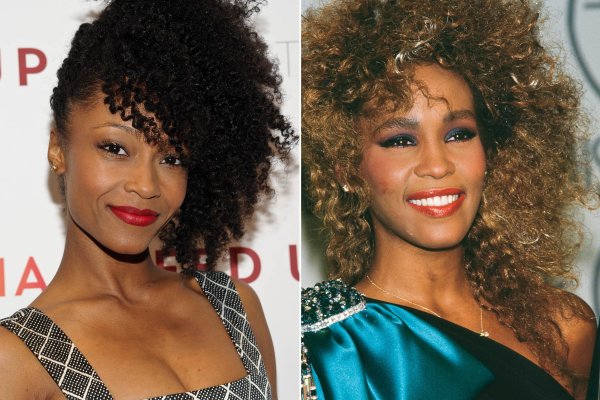 Watch the Trailer for Lifetime's Whitney Houston Biopic
Next Up: Editor's Pick