Obama Responds to Republican Push Back on Immigration Reform

President Barack Obama walks toward Marine One while departing the White House on Nov. 25, 2014 in Washington, DC.
Mark Wilson—Getty Images
By Maya Rhodan

On the same day that House Republicans voted for a no-chance bill to overturn his recent executive action on immigration, President Obama criticized them for failing to pass a comprehensive reform bill and instead working to “force talented young people” out of the country.

“The immigration issue is, I recognize, one that generates a lot of passion, but it does not make sense for us to want to push talent out,” Obama said.

Speaking at a White House summit on College Opportunity Thursday, Obama denounced a symbolic bill that passed the House along party lines later on Thursday, the Preventing Executive Overreach on Immigration Act of 2014. (219 members voted for the bill, while 197 against it.) Introduced by Republican Rep. Ted Yoho of Florida, the bill would nullify Obama’s plan to grant work permits and temporary legal status to about 5 million undocumented immigrants.

“Notwithstanding any other law, the executive branch of the Government shall not— exempt or defer, by Executive order, regulation, or any other means, categories of aliens considered under the immigration laws,” the bill text reads.

The vote offers Republican lawmakers an opportunity to formally express their disdain for the president’s executive action. The bill has no chance of passing the current Senate, but Obama would veto it anyway. It also comes amid the pending struggle to ensure that the government stays funded after Dec. 11, which many speculated could be held up if the President acted alone on immigration.

The vote will also come as 17 states including Texas, Alabama, Georgia, Montana and Louisiana sued the federal government over the actions. Texas governor-elect Greg Abott is leading states’ charge against the action, saying it “tramples” the U.S. Constitution.

Obama and the White House, however, are holding firm. Next Tuesday, the President will appear in Nashville to again tout his actions.

“The President took action after leaving the door as wide open as possible for bipartisan action,”said a senior administration official. “He took an important first step and he will continue to press the case for that step and for Congress to do it’s job and fix the immigration system that is broken.” 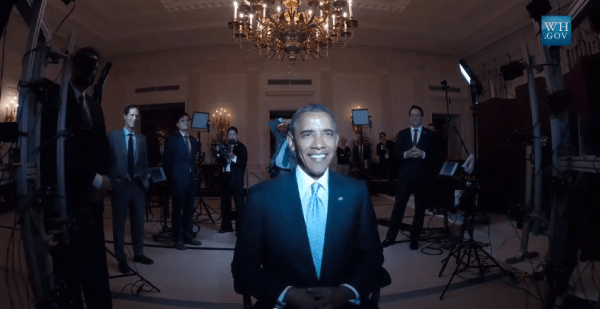 Watch President Obama Sit for a 3D-Portrait
Next Up: Editor's Pick