Elvis, Donald Trump and Other Reader Favorites for TIME's Person of the Year

As 1933 came to an end, and the seventh annual TIME Man of the Year issue approached, a reader named Charles Cassil Reynard wrote in from Hiram, Ohio, to note that his “snow-bound college town” had placed the following odds on whom the magazine would choose as the next honoree. Odds on Hitler were 6-5; odds on Roosevelt were 3-2. (The actual Person of the Year for 1933? National Recovery Administrator Hugh Samuel Johnson.)

The editor, in the letters section, responded as follows: “What Man-of-the-Year bets are other readers making?—ED.” Thus was born a long tradition that continues to this day, with Indian Prime Minister Narendra Modi being named Monday as the latest winner of the TIME Person of the Year Reader Poll.

Then, as now, the final decision is made by the editors — but that doesn’t mean the poll results aren’t worth reading. Over the years, especially during the pre-Internet years when every candidate was a write-in, the reader poll has yielded some extremely prescient suggestions…and some that are interesting in entirely different ways.

There have been plenty of readers who nailed the nomination, and even the art choices. For example, a reader named Fred Schmidt in 1938 suggested that “it is plain that [the Man of the Year] can’t be anybody else but Hitler” but that “it is just as plain that you will not have the courage and daring to publish his picture on the front page of TIME.” Sure enough, the Jan. 2, 1939, issue proclaimed that Hitler was Man of the Year, illustrated with an allegorical drawing of an “unholy organist” playing a “hymn of hate.”

Readers were also early to suggest that the Man of the Year didn’t necessarily have to be a single man. Though the first official conceptual choice didn’t arrive till 1950’s Man of the Year (the American G.I.), letters to the editor had earlier suggested The Forgotten Man, The Common Fighting Man, The American Voter and The American Farmer. Other category-wide nominations since then have included “the anonymous scientist, educator, teacher in the U.S., where ‘the American Way of Life’ pays him worse and considers him less than a garbage collector” (for 1957), “the American Negro” (for 1963, with the following note from the nominating reader: “Need I say more?”), the college student (nominated several times), Woodstock Nation (for 1969), and the American Woman (for 1970; the magazine ran with that choice five years later).

Not every reader took the question entirely seriously. Over the years there have been some nominations that are fairly farfetched, surprising or silly. These people — or non-people, as the case often was — may have been influential in a given year, but for one reason or another they didn’t stand a chance. Those nominees have included: Hopalong Cassidy, Richard Nixon’s dog Checkers, Li’l Abner, Elvis, the Man in the Moon, God, Snoopy, Secretariat, Alice Cooper, E.T., David Bowie, David Lee Roth, “Baby Jessica” who was rescued from the well, Dow Jones, Donald Trump and the lady from the “Where’s the beef?” ads.

And one nominee shows up over and over again: “Me.” For nearly as long as the magazine has been asking for suggestions for Person of the Year, readers have been raising their hands. Especially in times of global turmoil, there’s a certain aptness to the idea that living an average life and not harming anyone is the most influential way to create good in the world.

“My car, TV set and refrigerator are all paid for. I have lived with my first and only wife for over 32 years. I therefore, modestly but confidently, nominate myself,” wrote one Lyle Woods Bryan of Warrensburg, Mo., in 1960. A few years later, Deirdre A. McCormick of Tarrytown, N.Y., echoed that sentiment: “I am 19 years old. In 1967, I neither burned draft cards, dropped out of society, demonstrated against the war in Viet Nam, meditated with Maharishi Mahesh Yogi, shot acid, popped bennies, smoked bananas, participated in the sexual revolution, grooved in the East Village, married a man thrice my age, grew organic vegetables in Topanga Canyon, nor forced flowers and love on passersby.” Decades later, in 2000, it was Jonathan Michals of Melville, N.Y., who noted that he was “a regular guy who works hard.”

Perhaps the most moving such missive was this one, from 1936:

Ottinger was not himself selected — that was Wallis Simpson’s year — but he and his cohort did eventually get their wish. For 2006, the Person of the Year was, simply, “You.”

This year’s official selection for TIME’s Person of the Year will be announced Wednesday. 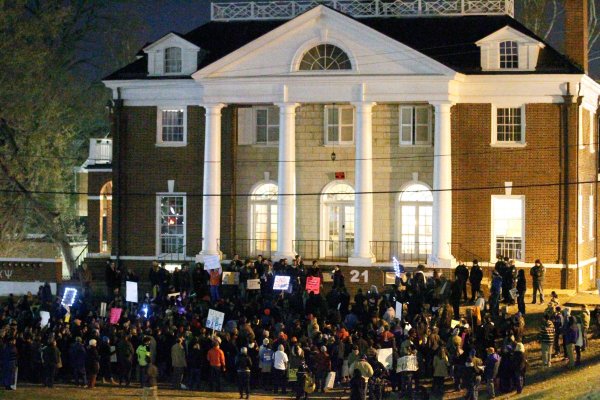 It's Women Who Suffer When We Don't Ask Questions
Next Up: Editor's Pick