Eric Garner and Why Cameras Are Not Magic Wands

People take part in a protest against the grand jury decision on the death of Eric Garner in midtown Manhattan in New York on Dec. 3, 2014.
Eric Thayer—Reuters
By James Poniewozik

“Publicity is justly commended as a remedy for social and industrial diseases. Sunlight is said to be the best of disinfectants; electric light the most efficient policeman.” —Justice Louis Brandeis

“We had a video. How can we win? We can’t win.” —James, a protester near the site of Eric Garner’s death in Staten Island

That was the constant refrain in the reactions to yesterday’s non-indictment of a police officer in the death of Eric Garner on Staten Island: “We had a video.” We’d just gone through the divisive Michael Brown case in Ferguson, Mo., a police-shooting case involving conflicting testimony and no video of the actual killing in question. This time was supposed to be different. Millions of people saw it. The world, as they say, was watching.

People who write about media and technology and society–people like me–can sometimes act like cameras are some magical, democratizing force, shining sunlight everywhere and disinfecting the dark corners. Put cameras in every pocket and Google Glass on every face and someday bad actors won’t be able to hide. People won’t be able to change their stories. This optimism is the opposite of the fear of a total-surveillance state. With bottom-up surveillance, the idea goes, we’ll live in an instant replay society; we will always be able to go to the videotape.

If nothing else, the Eric Garner case is a reminder not to get too carried away with this. Images are powerful. But so are laws, so are juries, so are people’s deep-seated fears and beliefs, so is confirmation bias. Seeing is believing, to a point. But seeing is not necessarily acting. And seeing will not necessarily shake a belief that someone is deeply committed to holding.

Over two decades ago, Rodney King was brutalized on videotape; the police who beat him were still acquitted. Ray Rice was caught on video punching out his wife; he’s no longer playing football, but already there’s talk of his eventual comeback. The police shooting of 12-year-old Tamir Rice was caught on camera, which pointed up contradictions to the original police account, but will there be consequences? We’ve just learned not to assume that.

It’s not that video is useless in any of these cases. It stokes outrage, for sure. But seeing isn’t enough; without action, the notion that millions of people saw something and still nothing changed could just lead to despair and cynicism, or numbing. The Garner video was about as unambiguous as could be, yet mostly it just meant that news stations were able to wallpaper their coverage, over and over, the video footage of a man beginning to die.

Having video is better than not having video, but this case should remind us–like with any over-optimistic embrace of technology’s social power–that it’s a tool, not a cure. Sure, put cameras on police; pull out your smartphone if you see something. But it’s not enough in itself that the whole world is watching. The whole world also needs to do something. 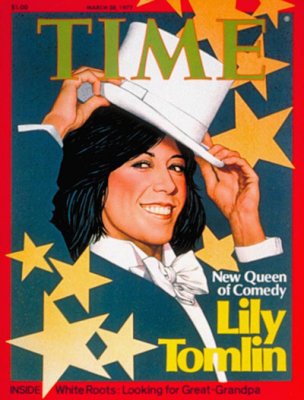 The Time Lily Tomlin Rejected the Cover of TIME
Next Up: Editor's Pick