Looking at the World Through Putin’s Pupils

Russia looks like it is readying to cleave Ukraine, perhaps bringing some of its eastern half back into the warm embrace of Mother Russia. After Vladimir Putin’s sleight of army, which deftly plucked Crimea back to the Kremlin’s fold after 60 years, anything is possible.

“The [Russian] force that is at the Ukrainian border now to the east is very, very sizable and very, very ready,” U.S. Air Force General Philip Breedlove, NATO’s top commander, said Sunday. The North Atlantic alliance has tried partnering with Russia for stability in Eurasia, he added, but “Russia is acting much more like an adversary than a partner.”

Given this sudden shift in the geostrategic winds, it’s worth pausing and pondering how this latest chill between Washington and Moscow looks to the Russian people. Whether military moves are justified to outsiders sometimes seems fuzzy if such actions are taken against allies, client states or puppet regimes—especially if they’re in the neighborhood.

Following the collapse of the Soviet Union in 1991, and decades of economic anemia in Russia that followed for everyone except plutocratic oligarchs, it’s easier to understand Putin’s successful military roll. After all, from a Russian point of view, the U.S. has been stepping on a lot of toes a little too close to Red Square.

So it may be worth considering how things look through former KGB-apparatchik Putin’s light-blue eyes. Since the fall of the Berlin Wall in 1989, the U.S. has:

Each of these events bothered at least some Russian elements in a big way. And while they may have appeared right, and even necessary, to most American eyes, Russians saw them as increasing evidence of U.S. bullying (not nice) and encroachment on Russia’s sphere of influence (really not nice). Local time in Baghdad and Kabul, for example, is within an hour of Moscow’s.

For those keeping score at home, Russia invaded the former Soviet republic of Georgia in 2008. It also recognizes Georgia’s separatist regions of Abkhazia and South Ossetia as independent states. Now it has gobbled up Crimea, and more of Ukraine may follow.

“Europe and America are united in our support of the Ukrainian government and the Ukrainian people,” President Obama said Monday in the Netherlands. “We’re united in imposing a cost on Russia for its actions so far.”

But despite such warnings, Putin is getting support for his latest land grab from an unusual corner. “We respect the decision the people of Crimea took through a recent referendum that considers Crimea as part of the Russian Federation,” Afghan President Hamid Karzai’s office said over the weekend. Kabul’s U.S.-installed and propped government was the first western-backed democracy to endorse Putin’s move.

“It’s clearly not helpful,” Rear Admiral John Kirby, the Pentagon spokesman, said Monday of Karzai’s comments. “It’s the opinion of the alliance that Russia is absolutely in violation of international obligations, violating the territorial integrity of Ukraine, and we continue to call for them to remove their troops from Crimea.”

Don’t count on that call being answered. 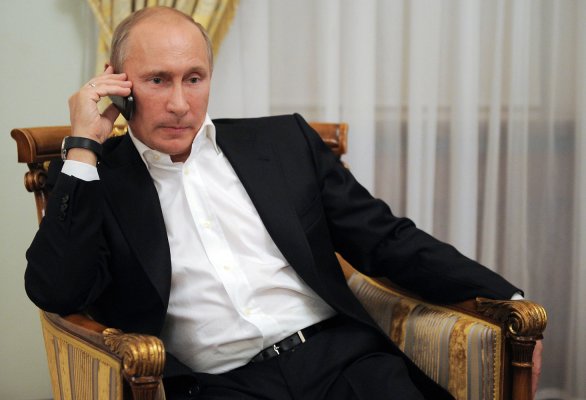