Can the man who discovered Taylor Swift also discover the next Taylor Hicks?

Scott Borchetta, the music executive who helped bring the world the wonder that is T-Swift, may be joining American Idol as a mentor, according to a source who spoke to The Hollywood Reporter.

Borchetta’s bona fides include being the President and CEO of the Big Machine label group, which signed Swift when she was just 14 years old. Big Machine is also home to such heavy-hitting talent as Tim McGraw, Rascal Flatts, Florida Georgia Line, Reba McEntire, and The Band Perry, as well as Danielle Bradbery, who won the fourth season of that other singing competition, The Voice. It will be interesting to see whether Idol leans towards country this season with the addition of Borchetta’s Nashville ear, plus Idol‘s resident country rocker, judge Keith Urban, who sits on the panel next to Jennifer Lopez and Harry Connick Jr.

If Borchetta does join the cast, he would be stepping in as mentor to the contestants vying for the prize on Idol‘s upcoming 14th season, in the spot vacated by Interscope Records exec Jimmy Iovine and long-time Idol mainstay Randy Jackson — who is finally hanging up his top dawg status and retiring from the show. 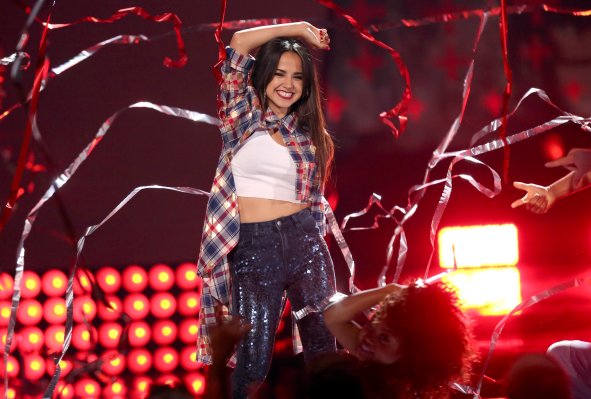 Can Becky G Actually Stop Dancing? An Investigation into Her New Video
Next Up: Editor's Pick