At just 24, Zoe Sugg, has already become an online sensation, producing beauty and fashion videos on YouTube that have been watched more than 400 million times. But this week the English video blogger also became a literary sensation. Her first novel, Girl Online, sold more copies in its first week of publication in the United Kingdom than any previous debut novel on record and is now the U.K.’s fastest selling book of the year.

The Young Adult novel, which was published on Nov. 25 by Atria/Keywords Press in the U.S. and by Penguin in the U.K., sold more than 78,000 copies in its first week, the highest number of sales in the first week recorded by Nielsen BookScan since they began recording information six years ago, according to The Bookseller. First-week sales for Girl Online, which has been billed as a modern-day Notting Hill for teens, have even eclipsed the first-week sales from the debuts of J.K. Rowling, Dan Brown and EL James.

Commenting on the book’s strong debut, Sugg, who has 2.6 million followers on Twitter, said in a statement, “It’s such an amazing feeling. I’m so grateful to everyone who has bought a copy of Girl Online. I love that so many of my viewers are enjoying the book! This year has been so exciting and this for sure is the icing on the cake.”

Sugg, who is widely known by her blog name, Zoella, first rose to fame with her beauty and make-up tutorials, attracting millions of views from a young and loyal fanbase. When she first started her blog in early 2009 she wrote posts about beauty products she liked or her shopping trips. But before long she branched out and started vlogging (video blogging). Her upbeat, unpretentious tips and tutorials — where she’d demonstrate how to perfect a messy bun or share which drugstore cosmetics she loves — proved popular with her young fans. Sugg then started vlogging about weightier issues such as body image, anxiety and panic attacks and offering life advice for her devoted viewers, cementing her role as an inspiration and idol for millions of young girls.

And thanks to her sunny disposition and wholesome lifestyle — Sugg is vocal about the fact that she doesn’t drink or do drugs — Zoella’s approval rating with parents of young girls also sky-rocketed. In the Telegraph, writer Judith Woods, whose young daughter counts herself among Sugg’s many fans, pronounced the young star “The Perfect Role Model.”

But 2014 has been the year when things really exploded for Sugg offline as well. Not only did she secure a two-book deal with Penguin — Girl Online’s sequel is due out next year — she scored the Teen Choice Award for Choice Web Star: Fashion and Beauty, appeared in British Vogue, launched her own line of beauty products and was even asked by Bob Geldof to sing on the Band Aid charity single for Ebola along with Bono, One Direction and Ed Sheeran.

As her star has risen, Sugg has met some backlash. A handful of British journalists and other bloggers have criticized Sugg and her burgeoning empire. A writer for the Independent described Sugg’s persona as “sickly sweet” and wondered why the vlogger didn’t “encourage kids to spend their pocket money on books or days out with friends, rather than on the latest liquid eyeliner.” Meanwhile, in the Telegraph, a piece described Sugg as “both a product and a figurehead of a generation that is obsessed with staying safe,” not to mention “infuriatingly bland and intimidatingly perfect.”

Not that her fans are swayed by the criticism; tickets for her Girl Online book signings across the U.K. last week sold out within 24 hours. It’s hard to imagine that even Sugg would be bothered by a few naysayers. In an interview with the Financial Times, Sugg reflected on her exploding fame, saying, “I never expected any of this to happen so I’m just going to go with it and make the most of it.” 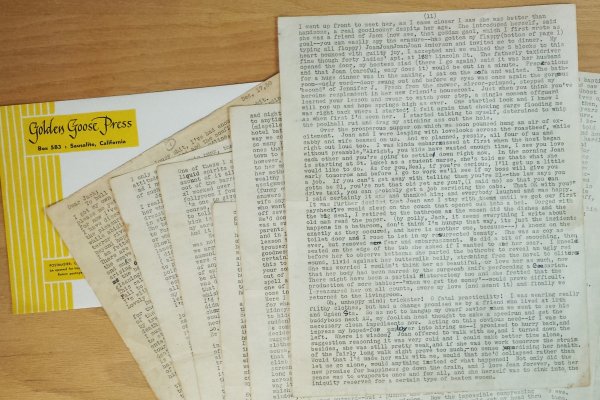 Long Lost Letter That Inspired On the Road Found in Oakland
Next Up: Editor's Pick