The six-year-old who accompanied me to the theater was enthralled. Plenty of adults, too, were on their feet, and not just for the obligatory standing ovation at the final curtain. Even the critics, reviewing the new musical Aladdin, seemed to temper their usual disdain for all things Disney and lavish praise. Maybe Disney is finally getting some respect.

Ever since The Lion King — the one show everyone agreed was great — the stage musicals that Disney has adapted from its animated movie musicals, no matter how crowd-pleasing, have been greeted by most of the critics with dyspeptic concern for the fate of the American theater. To the guardians of Broadway standards, Disney shows represent the dumbing down of the musical, the supplanting of serious storytelling with theme-park spectacle, the invasion of crass corporate commercialism on the Great White Way.

Rarely is Disney given credit for its role in keeping Broadway as vibrant and healthy as it still is. With the release 25 years ago of The Little Mermaid — the film that launched the studio’s animation renaissance — Disney introduced a new generation of children to the book musical. The kids who fell in love with Mermaid, Beauty and the Beast, Aladdin and the others followed them to Broadway, and dragged their parents along. The conventions of the musical were not strange to this generation (the way they were, say, to the rock generation that largely turned its back on Broadway). As a result, family-friendly shows like The Lion King and (the non-Disney-produced) Wicked have become some of the biggest box office hits in Broadway history.

What’s more, for a crassly commercial entertainment conglomerate, Disney has shown a lot of respect for creative artists. Nearly every Disney show has featured innovative staging, to turn animation into theatrical entertainment: Julie Taymor’s groundbreaking puppetry and set design for The Lion King; the elegant, wheelie-assisted movement for the sea creatures in Francesca Zambello’s The Little Mermaid; Pinchon Baldinu’s dazzling aerial choreography for Tarzan (Disney’s one Broadway flop). Disney recruits artists, not hacks; spends years developing its shows; and turns out product that may be formulaic but never looks cheap or half-baked.

Aladdin, in truth, seems to mark a certain downsizing of ambition. Director-choreographer Casey Nickolaw (The Book of Mormon, The Drowsy Chaperone) is no theatrical innovator, simply a talented Broadway song-and-dance man. Except for some nifty sleight of hand (with the help of stage trapdoors) for entrances and exits, and a magic carpet ride using technology that would probably not have been unfamiliar to Peter Pan, the show relies less on stage legerdemain than tongue-in-cheek, self-referential wit (“They’re playing music while we’re fighting!”) and old-fashioned Broadway pizzazz, of which it has plenty.

The biggest challenge in adapting the movie for the stage was not technical but comedic: finding a way to reproduce Robin Williams’ hilariously manic vocal performance as the Genie. That task goes to James Monroe Iglehart, a rotund Broadway veteran (Memphis, The Wiz), who huffs and puffs through his big number, “A Friend Like Me,” doing a mash-up of a songs from other Disney shows and speed-dialing references to everything from Oprah Winfrey to Let’s Make a Deal. He’s no Robin Williams, but he gives the show a boost, and with help from a tap-dancing, gold-plated backup chorus, the number stops the show.

The Disney formula is as familiar as ever: a commoner hero (Adam Jacobs) with a day-glo smile and a band of wisecracking sidekicks; a feisty, proto-feminist princess (Courtney Reed) who rebels against court tradition and wants to pick her own husband; a Captain Hook-style villain with his short, round, Smee-like helpmate. The love story is even more anodyne and emotion-free than usual for Disney, but Alan Menken has written some peppy new songs (supplementing the movie’s score, including the Disney standard “A Whole New World”), that are slotted in as neatly as oversized pieces in a children’s jigsaw puzzle.

The show doesn’t have the fairy-tale resonance of The Little Mermaid or the emotional depth of Mary Poppins, two Disney stage musicals that didn’t have the runs they deserved. But Aladdin is frisky and fun, another demonstration of Disney professionalism. Don’t scoff. It helped save Broadway. 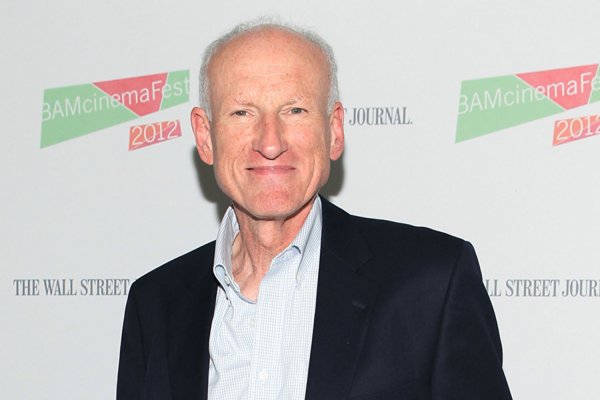 Homeland Actor James Rebhorn Wrote His Own Obituary
Next Up: Editor's Pick