How on Earth Is Roger Goodell Still the Commissioner of the NFL?

It’s been a tumultuous seven days for the NFL’s lord of discipline, Commissioner Roger Goodell. Last week, one of the league’s premier players, Seattle’s Richard Sherman, held a faux press conference mocking the NFL as a hypocrite on a number of fronts. Surprisingly, the league sat back and took it with a “no comment.”

You question a holding call publicly in the NFL and you get fined big money. You openly and extensively question a flailing commissioner’s integrity… nothing.

Friday, Judge Barbara S. Jones, serving as the neutral arbiter in the Ray Rice appeal case, overturned Goodell’s previous indefinite suspension of Rice. The big takeaway in the decision: Judge Jones didn’t buy Goodell’s assertion that the initial suspension was based on “ambiguity” in Rice’s reporting of the incident. In short, her conclusion plainly highlights that what Goodell claimed wasn’t true. He lied. There was no ambiguity.

Now, in a recent discussion with TODAY’s Matt Lauer, the dishonest label has been hammered home by Rice’s wife (then-fiancée) Janay Rice herself:

In the midst of all this, Goodell and the league are taking part in a fake-independent investigation, by hiring ex-FBI director Robert Mueller to conduct the NFL’s internal inquiry. In a Goodell press conference back in September, reporter Rachel Nichols expertly pressed the commissioner on how hiring someone whose firm, WilmerHale, has very close ties to the NFL (including the negotiation of some TV deals) could possibly be independent.

Goodell’s answer was predictably evasive. As far as anyone knows, this “investigation” is ongoing with no known timetable for completion.

Overall, this “did he see the video or not?” exercise feels like my son saying he didn’t see his homework in his backpack. My son realized how weak that excuse was while in first grade.

As each new layer of certified public distrust crusts on the league’s commissioner, the question of why NFL owners continue to sit on their hands glows neon. In a hyper-image-conscious league, why let that image fall into such disrepair without taking some action against the responsible party? They have a fall guy.

At the very least, why isn’t Goodell temporarily suspended until the results of the investigation are completed?

I know, I know… Goodell helped bring great financial success to the NFL with past TV deals. But the NFL is never about what you did before. It’s what are you doing for me now. Past exploits are a phony rationalization for inaction in the moment. Ray Rice also scored a lot of touchdowns, but he became bad for the Ravens and was immediately expendable. That’s the NFL lifecycle.

I find it hard to believe that Goodell is the only person on earth that could sell water in the desert. Football is a tremendously popular sport in America. The networks aren’t paying for Roger Goodell.

Foresight is what this league is usually all about. Planning ahead for franchises in other countries, embracing a tremendously profitable new stream of revenue in fantasy football (while pretending to be adamantly against gambling for integrity reasons), and expanding their reach into mobile platforms to satiate an increasingly short-attention-spanned consumer. The NFL knows foresight.

So why be miles behind the curve on this Goodell thing? It makes zero sense.

With the commissioner’s personal credibility in the toilet with fans and players, outward displays of challenges to his authority are absolutely inevitable. Richard Sherman’s short skit is one tiny thing, but how about a simultaneous statement by the entire player membership the next time there’s a questionable issue? You can’t fine more than 1,500 people at once. If you have to, you’ve lost authority.

Fans aren’t going anywhere, but they have their creative ways of disrupting the brand and speaking directly to advertisers. Somebody is going to hand the Super Bowl champions their trophy. Somebody has to announce the draft. Each of these are huge moments of pride for all people associated with the NFL. It can’t be delivered by the person whose every breath behind the podium will be loathed and booed.

Fans and players don’t respect him for a litany of on- and off-field reasons. Past history shouldn’t matter.

Enough is enough. Save the brand we all love from another round of damaging news cycles, and teach the commissioner that real accountability to the NFL shield is for everyone.

Matt Chatham is a former NFL linebacker for the New England Patriots and the New York Jets and the founder of footballbyfootball.com. 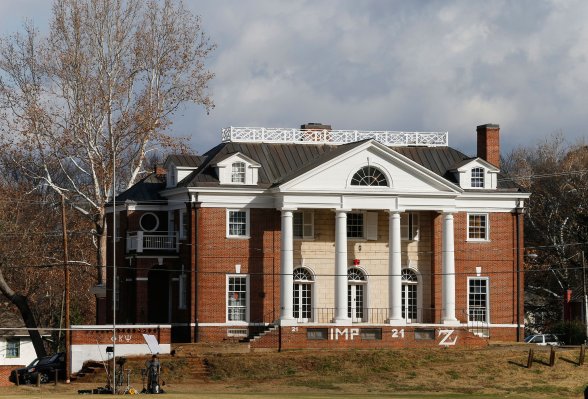 If There Were Ever a Time to Abolish Frats, It's Now
Next Up: Editor's Pick