Protesters participate in a nationwide demonstration to show solidarity for Michael Brown and the Ferguson community in Union Square in New York City on Dec. 1, 2014.
Timothy A. Clary—AFP/Getty Images
By Nolan Feeney

Demonstrators across the country walked out of jobs and classrooms on Monday to protest the police killings of Michael Brown, in Ferguson, Mo., and Tamir Rice in Cleveland this year.

Events were planned for more than 30 cities, Al Jazeera America reports. Dozens of events were scheduled to take place at university campuses on Monday, according to the Ferguson National Response Network’s Tumblr. The “Hands Up Walk Out” events were mostly planned to occur at 12:01 p.m. CT, the time when now-former Ferguson officer Darren Wilson shot Brown.

The name of the even comes from witnesses who said Brown had his hands up when Wilson shot him, which has become a rallying cry at demonstrations over policing and racism.

Brown, 18, was unarmed when he was shot by police officer Darren Wilson during an August confrontation that sparked a number of protests. Last week, a grand jury decided not to indict Wilson, who has since resigned from his job (without receiving severance), which led to further protests across the country in more than 100 cities.

Cleveland police shot 12-year-old Rice within seconds of arriving on the scene, according to police statements and surveillance footage released last Wednesday. Officers were responding to a call about “a guy” waving what appeared to be a gun on a playground. While the caller said the gun was “probably” fake, that information was not relayed to the responding officers.

Ferguson Action, an organization taking part in Monday’s events, said on its website that the death of Brooklyn man Akai Gurley, who was accidentally shot by police earlier this month, also inspired the walkouts.

Organizers encouraged participants to document the walk-out on social media using the hashtag #HandsUpWalkout as well as #BlackLivesMatter, #Ferguson and #ShutItDown.

“We can no longer do what we have always done and cooperate with a system that does not respect Black Lives,” Ferguson Action said. “We will only get the change we want if we disrupt the daily order and insists that Black Lives Matter. If that means shutting down the entire country, that’s what we’ll do.” 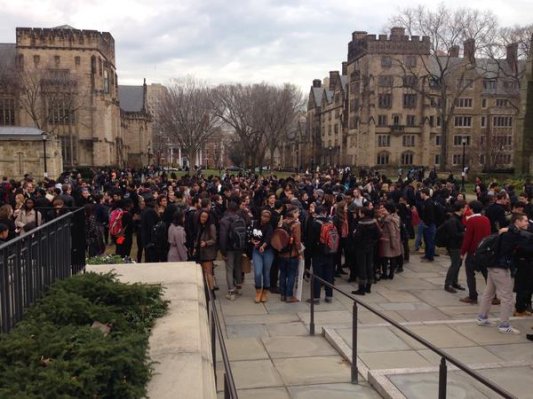 See the Nation #HandsUpWalkOut in Solidarity With Ferguson
Next Up: Editor's Pick