An anti-government protester crawls with his pistol during a gunfight between supporters and opponents of Thailand's government near Laksi district office in Bangkok Feb. 1, 2014.
Nir Elias / Reuters
By Sam Frizell

Around eight gunmen emerged from a crowd of anti-government protestors who are seeking to derail a national vote, CNN reports, firing on police and pro-government citizens for about half an hour.

The Thai government has been reticent to respond to the recent unrest in force for fear of sparking a coup, and there were few security forces present on Saturday to respond to the gunfire. Around 20 police officers and a dozen soldiers took cover behind their vehicles.

The anti-government demonstrators have sought for months to dislodge Prime Minister Yingluck Shinawatra in increasingly violent protests that have left 10 people dead and hundred wounded.

Yingluck has called for a Feb. 2 vote in order to quell unrest in the country that has pitted anti-government protestors from Bangkok’s middle classes and Thailand’s south against loyalists from the poorer but more populous north.

The protestors, who have vowed to block the Sunday vote, accuse Yingluck of kowtowing to her brother Thaksin Shinawatra, a business tycoon exiled from Thailand in a 2006 military coup. In pre-election voting last Sunday, protestors threatened voters and successfully prevented hundreds of thousands from casting ballots. Clashes are expected to worsen on Feb. 2. 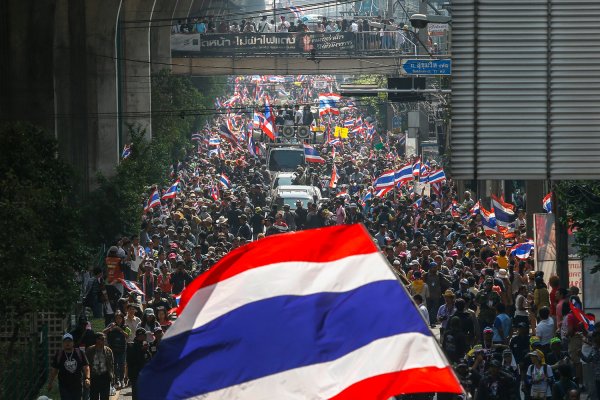 3 Ways to Save Thailand's Election From Disaster
Next Up: Editor's Pick