A demonstration in Portland, Oregon was the scene of an unusual embrace last week.

The November 25 protest was held, along with many across the United States, in solidarity with the family of Michael Brown, the unarmed black teenager shot and killed by a white policeman in August, following a grand jury’s decision not to indict the officer.

Photographer Johnny Nguyen brought his camera to the protest and met a 12-year-old black boy named Devonte Hart, who was overcome with emotion.

“I saw tears running down Devonte’s face and a sign that said free hugs around his neck,” Nguyen, 20, recalls. “There was a lot going on, but my gut told right then and there to stay with this kid.”

Nguyen followed Devonte through the crowd and watched as a white Portland police officer named Bret Barnum looked at Devonte’s sign and asked, “Do I get one of those?” The pair hugged.

“It has spread the message of coming together despite our differences,” says Nguyen of the photo, which he put on Instagram. “The message is about love and compassion and finding a common ground.”

After the hug, the two went their separate ways: the 12-year-old Hart to go protest, and Barnum to do police work.

Nguyen says that Americans have been waiting for a sign of togetherness after the vitriol and anger of the past week. “I think people deep down have been clambering for a glimmer of hope amidst all the negativity going on,” Nguyen said. “I’m just glad I was there, in the right place and the right time.” 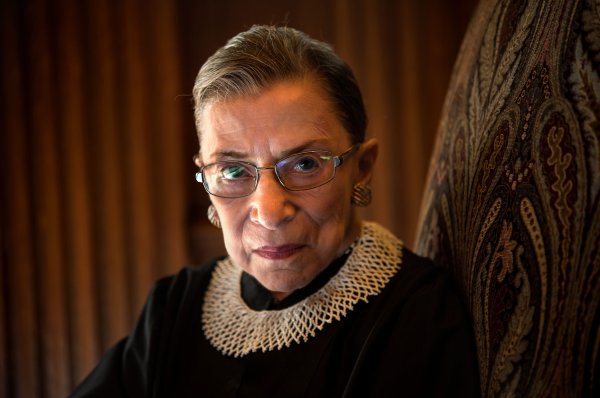 Ruth Bader Ginsburg Released From Hospital
Next Up: Editor's Pick