How to Run a Billion Dollar Brand Before You're 35

Kat Cole dropped out of college to open international Hooters franchises at 20, became a vice president of Hooters at 26 and was appointed president of Cinnabon before she’d even completed her MBA. What’s the secret to her rapid ascent? Be curious, and be helpful.

Cole’s career began at 17, when she was hired as a hostess at Hooters in Jacksonville, Fla. When she turned 18, she became a waitress and a Hooters girl. One day, the kitchen employees walked out to protest management, which meant there was nobody to cook the food. “If the food didn’t get made, it wouldn’t get delivered, and I wouldn’t get paid, and I couldn’t pay my bills,” Cole says. So she and a few of her colleagues went into the kitchen and picked up where the cooks had left off, frying the chicken wings. “I did it because I wanted to be helpful,” she says. “But I also did it because I was curious to see if I could do it.”

Besides, “cooking chicken wings is not difficult — when they float, they’re done.”

Cole helped out when a bartender needed to leave early to pick up her kid. She pitched in when a manager was coming in late and needed someone to open the restaurant. Over the course of six months, she became so knowledgable about each role at Hooters that she could train new employees to do all of them.

At that point, Cole wasn’t thinking about moving up in the restaurant industry — she was just using her job at Hooters to pay the bills while she put herself through school. She was an engineering major at the University of North Florida, the first in her family to go to college. But soon Hooters started asking her to go around to other franchises in the Jacksonville area to train new employees. She became a manager, then a regional trainer and was soon overseeing employee training for the entire region, even though she was still a college student.

Then, when she was 19, she got a phone call from the Hooters corporate office that changed everything. They wanted her to go to join a team of people going to Australia to open the first-ever Hooters on the continent. “I had never been on a plane, I didn’t have a passport, I had never been out of the country, and I had only been out of the state two times in my life for cheerleading competitions on a schoolbus,” she says. “But despite all of that I still said yes.”

After Cole got back from Australia, she worked to make up all her classes to continue toward her degree. But a few weeks later, another call came. This time, they wanted her to go Mexico City to open the first Hooters in central America. Then another call came. They wanted her to go to Buenos Aires to open the first Hooters in South America, but this time she’d be running the entire show — setting up the supply chain, training the franchisees, hiring of employees, then bringing the training team down, leading those people and staying on site to make sure restaurants opened properly. She was 20.

When she got back to college, Cole was failing her classes. Her professors told her she could only stay in school if she stopped traveling and worked less. So she dropped out. Even though she would later get her MBA, Cole never finished her undergraduate degree.

“I dropped out not because I had any assurances of anything, but I did have a compelling alternative,” she says. “At a minimum, I hoped I could continue doing what I had been doing, and continue taking on more responsibility.”

And that’s what happened. A few months later, she got another phone call, this time to interview for a corporate job. So at the age of 20, Kat Cole became the Global Employee Training Coordinator for Hooters restaurants. She had to give up working restaurant shifts, which meant taking a 50% pay cut.

She quickly worked her way up, and by 26, she was a Vice President of Hooters, reporting directly to the CEO. So was it just simple curiosity and helpfulness propelled a 26-year old college dropout to the executive level of one of America’s biggest food franchises? In Kat Cole’s case, yes. But she also says she never would have risen so fast if she hadn’t been involved in industry organizations.

She started volunteering on committees with other industry leaders, building relationships with other people working in the business. Somebody recommended she join the Georgia Restaurant Association. So she did and soon Cole was on the board of directors.

But how did this industry volunteer positions really contribute to her success? “Because I was being curious and helpful, over the course of months and skills I amassed a resume of leadership skills that I never would have gotten that fast if I only worked one job,” she explains. “It was almost like I had this unfair leadership advantage, because I was leading two or three leadership lives.” And starting in January, Cole will be taking over as chair of the board of the Women’s Foodservice Forum, the same organization that showed her what was possible 10 years ago.

Cole also says her work with the WFF and the Georgia Restaurant Association gave her a competitive edge that helped offset her lack of a college degree. “I was the daughter of an alcoholic and a single parent, I worked at Hooters most of my life, and I dropped out of college,” she explains. “You tell me if that inspires you to want to have me run your company.”

Her reputation as a volunteer and leader in the industry would help push Cole’s career to the next level. She eventually got recruited by a private equity firm, Roark Capital. She was about to leave Hooters for Roark when she found out Hooters was being sold. There’s never a good time to leave a company that’s become like a family, she says, but “that would be a really crappy time.”

So she stayed to help the company through the sale, and it ended up opening even more doors for her. “Funny things happen when you are just curious and helpful. Instead of leaving to go to one private equity company I ended up staying to present to 15 of them, and about half of them recruited me.”

That’s when Roark called her back, asking her to interview to be the new President of Cinnabon. “I thought, hey, I‘ll give it a whirl,” she says, but assumed the job would go to someone more seasoned, like someone who already had an MBA — Cole was still working through hers at Georgia State University at the time. But despite the fact she had no college degree or MBA (yet,) she got the job. She co-signed the Hooters sale on a Friday, and she started at Cinnabon the next Monday.

Now, four years after Cole took the reins at Cinnabon, year-by-year sales have been improving faster than they have in over a decade, and the company broke the $1 billion mark in annual global multi-channel product sales, with more than 1,200 locations in 56 countries. And even over Thankgiving, Cole wasn’t taking a break. Malls across the country were open, which means Cinnabons were open, too. “If the people in our franchises have to work, so do I,” she says. 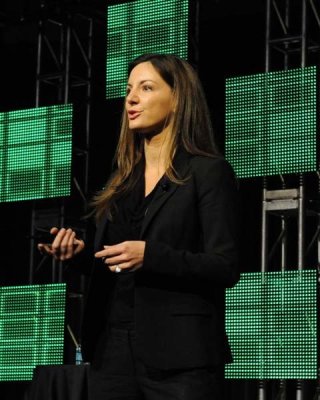 How Cinnabon President Kat Cole Went from Hostess to COO: 9 Tips for Success
Next Up: Editor's Pick