The so-called “Super Bowl” of retail is finally upon us.

While the busiest time of the holiday shopping season is really the weekend before Christmas, Black Friday really sets the tone for the season, and gives retailers a read on what’s working and what’s not, and what consumer mood is at the start of a season that generates 30% of annual profit for the industry. (A word of caution: time and again, a big Black Friday was followed by a so-so season as people only turned out for big, profit-sapping bargains.)

Retailers have gone all out this year, aware that shoppers are price-sensitive, but also equipped with smartphones to find the best deals, leading to a particularly promotional season so far.

Indeed, Target and Wal-Mart Stores , among others, got an early start on deals and got aggressive. Macy’s and J.C. Penney are again opening doors earlier this holiday season.

That’s because retailers know the going will be tough. Walmart and Target have each forecast only modest growth at best for comparable holiday quarter sales. And department stores, as well as specialty retailers like Gap reported weak October sales. The National Retail Federation is forecasting 140.1 million shoppers will head out to stores at some point between Thursday and Sunday, a smidgeon less than last year.

Still, some thing are working in shoppers’, and therefore retailers’ favor, in terms of the mood to shop. Gas prices are lower, the job recovery is continuing, and consumer confidence is rebounding from a market scare in October, according to the Reuters/University of Michigan Consumer Sentiment Index.

“The economic recovery has now trickled down far enough to help more shoppers,” Rod Sides, U.S. Consulting Retail & Distribution leader and principal at Deloitte, told Fortune. “A good Black Friday offers no guarantees for the whole season, but it gets it off to a good start.”

Even if the holiday season is somewhat promising, some retailers have a lot at stake and need for it to be successful.

Here are the stores that are in the hot seat.

The retailer recently broke a streak of seven straight quarters without U.S. comparable sales growth, but only barely: last quarter, it reported a modest 0.5% rise, and forecast a 1% increase at best during the current holiday three-month period. Walmart has been very aggressiveabout discounting for the season, eager to show that last quarter’s improvement wasn’t a flash in the pan. Walmart needs to show that its pricing strategy is working, and that its big investments in technology aimed at make shopping smoother (such as in-store pickup for online orders) can help with a chronic problem: declining shopper traffic.

Under the leadership of new CEO Brian Cornell, Target posted a surprisingly good third quarter. But the discounter needs a strong holiday season to help make up for 2014, when a massive data breach right before Christmas wrecked its results for the season. Target is trailing some its rivals in terms of tech and e-commerce and will want to show that it has made big strides this year.

Penney disappointed investors two weeks ago when it reported flat quarterly comparable sales, suggesting that its comeback might be shortlived. CEO Mike Ullman, who is leaving in August to be replaced by Marvin Ellison, proclaimed that “our core customer is back,” yet sales are still 30% where they were before ex-CEO Ron Johnson tried to radically transform the retailer and chased away that loyal shopper. Penney is under the gun to show it can do more than just come back from the brink and actually grow and attract more than just its traditional clientele.

Macy’s reported poor sales results last quarter, blaming shoppers for spending their money on things it doesn’t sell, like their cars and big appliances. But Macy’s has a head start on its department store rivals in terms of tech and e-commerce and should have more to show for it than two quarters of negative comparable sales in the last three. It also caters to a more middle and upper middle class clientele, so should be better shielded from consumer malaise than Penney or Kohl’s .

The retailer just reported an unexpectedly good quarter in the U.S., so a successful holiday season will show how much it can withstand aggressive pricing from competitors and whether it’s focus on higher touch areas like connected homes, and shops for Samsung can keep the company relevant.

Earlier this month, Kohl’s somehow managed to badly miss a quarterly forecast it had only just recently given, raising fears about how poorly its business is faring in this promotional environment. CEO Kevin Mansell unveiled a“Greatness Agenda” to return the once high-flying department store to form, and he is under the gun to show those efforts are starting to pay off.

Toys R Us reported a dismal holiday season in 2013, with comparable sales down 4.1%. Things improved in 2014, with modest increases but the company is fighting for holiday sales with the likes of Walmart, Target and Amazon.com, which have each shown how they will fight hard on the toy segment. The whole “Frozen” phenomenon will help Toys R Us, but Toys is playing in a particularly competitive sandbox this year and it gets 40% of sales this time of year.

The department store’s comparable sales declines have moderated of late, but parent company Sears Holdings has spent a big chunk of 2014 selling off assets to build up its cash cushion as it looks to shift more sales to digital commerce. The company has also floated the idea of creating an investment vehicle holding some 300 of its best stores—but for potential investors to want a piece of it, Sears needs to show its stores can still draw shoppers at the most competitive time of the year.

The retailers Gap and Banana Republic brands have struggled in 2014 to find their footing, and parent company Gap Inc recently announced new brand presidents in a bid to shake things up. And Art Peck, current head of its digital business, takes over as CEO in February. But Gap competes in a tough arena, apparel, that is increasingly coming to be seen by shoppers as a commodity. The holiday season will be a gauge of whether the recent struggles are just part of the ebbs and flows of fashion, or a sign of something deeper.

In October, RadioShack landed a deal with creditors to refinance a lot of its debt, two weeks after the electronics retailer warned it might have to file for bankrupcty protection. Perhaps no retailer is under as much pressure this holiday season to show it is still viable in this tough retail environment than RadioShack. 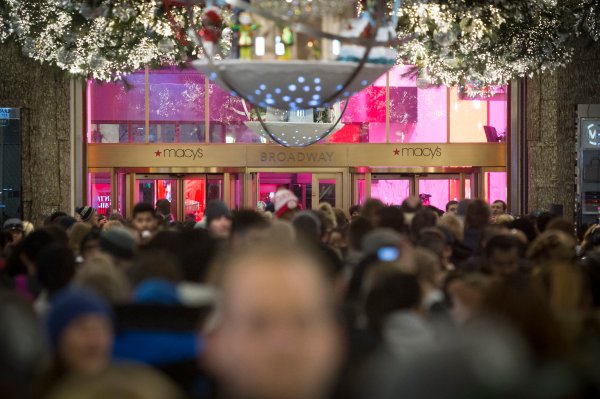