New Kim on the Block: The Rise of Kim Jong Un's Little Sister

At last, a North Korea rumor proves true: all year, Korea watchers have been buzzing about the rise of Kim Jong Un’s little sister, Kim Yo Jong. She popped up at her father Kim Jong Il’s December 2011 funeral, then reappeared next to her brother on election day in March of this year. (Yes, North Korea has elections, of sorts.) Experts speculated that her presence at a high-profile political event signaled that she was on the rise within the regime but, as with many things in the Democratic People’s Republic of Korea (DPRK), as it is officially called, the theory was just that — until now.

On Thursday, Nov. 26, in an otherwise humdrum account of Kim Jong Un’s visit to a cartoon studio, state media listed Kim Yo Jong as “vice department director” in the powerful Central Committee of the ruling Worker’s Party. In March, when she was pictured beside her brother on polling day, she was identified only as a “senior official.” Though the precise role of a “vice department director” is unclear, that she has an official title suggests a relatively high-profile, and potentially important, role.

So who is Kim Yo Jong? Korea scholars believe she was born in 1987 or 1988, making her 26 or 27 years old, and that she is close to her brother, Kim Jong Un. Their father, former dictator Kim Jong Il, fathered at least seven children by four women, but Kim Jong Un and Kim Yo Jong have the same parentage. They were raised by their mother Ko Young Hui at a hillside estate, says Michael Madden, the founder of North Korea Leadership Watch. Largely restricted to the palace grounds, they were exposed, for the most part, to family members and close friends. “As they say in [Martin Scorsese’s mafia epic] Goodfellas, ‘There were never any outsiders,’” says Madden. “The life of Kim children was hermetically sealed.”

At some point in the mid-1990s, as North Korea starved, Kim Jong Un and his sister Kim Yo Jong were sent to to school in Switzerland. They studied under pseudonyms, presumably to protect their privacy and keep them safe. Remarkably little is known about their time there, Madden says. Upon returning to the DPRK, Kim Yo Jong likely attended university, although the details of that period are still fuzzy. Her stature within the clan started to crystallize at Kim Jong Il’s funeral, when she was spotted walking directly behind heir-apparent Kim Jong Un.

Analysts are still piecing together what, exactly, Kim Yo Jong does. She has been pictured several times in her brother’s company, often on “field guidance tours” (that’s DPRK-speak for the Kim clan looking at things). These appearances have fueled theories that she serves as a sort of events director and aide to her brother, managing his schedule and accompanying him on trips. If that is indeed her role — and again, these things are difficult to pinpoint — it suggests a level of closeness that would give her access to a lot of information. “She may be one of the only people Kim Jong Un trusts completely,” Madden says.

Her presence at Kim Jong Un’s side is rich with symbolism. Her first official public appearance, in March 2014, came not long after the disappearance of her aunt Kim Kyong Hui, who has not been seen since her husband Jang Sung Thaek was executed in late 2013. Before the purge, Kim Kyong Hui was a close adviser to Kim Jong Il, holding key jobs in the ruling party and “protecting her brother’s flank,” according to Ken Gause, a Korea expert at CNA Corp., a Washington, D.C.–based research firm. Kim Il Sung, the country’s revered founding father, also ruled with a sibling — his brother — at his side (until he demoted him).

This new sibling pairing provides an important sense of continuity. Though North Korea is often called a communist state, it is really more of a totalitarian monarchy. North Koreans are taught that Kim Il Sung was a fearsome warrior who, while camped at the base of Mount Paektu with some comrades, crushed a much larger force of Japanese invaders. His son and heir, Kim Jong Il, is said to have been born at the same site, imbued with the same superhuman abilities — heck, he officially shot 11 holes in one in his first-ever game of golf.

Since the deification of the Kim clan is what makes North Korea tick, providing a symbolic link to the past makes sense, even while power passes to the next generation. “The old power elites loyal to Kim Jong Il are being pushed out,” said Yang Moo-jin, a professor at Seoul’s University of North Korean Studies, in an interview earlier this year. “They will be replaced by new, younger elites who can safeguard the leadership of Kim Jong Un.” So goodbye, Kim Kyong Hui, and hello, Kim Yo Jong. 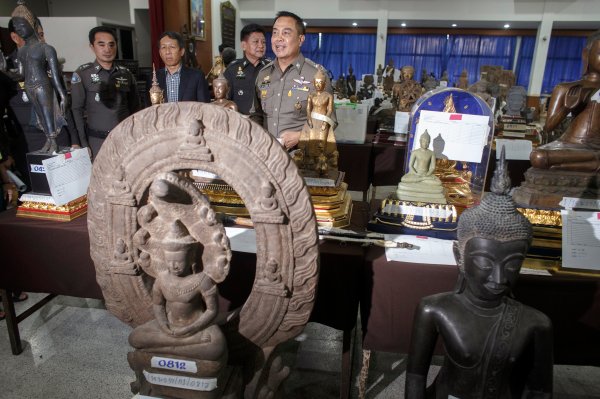 Thai Junta to Rule Until 2016
Next Up: Editor's Pick