How a Target Store Gets Ready for Black Friday

When you show up at your favorite store on Thanksgiving night looking for that big deal on a smart TV, you will probably be too busy to think about all the work—and science—that went into prepping the place, from putting up signage, to laying out and replenishing the merchandise, to establishing safety protocols.

For a big-box store like Target, it takes pretty much a small village to make the Black Thanksgiving/Black Friday shopping extravaganza go off without a hitch.

One such village is the 170,000-square-foot Target store in Westbury, N.Y., where Tony Roman, senior group vice president overseeing the retailer’s stores in Greater New York, gave Fortune a tour this week ahead of Thanksgiving. (Target stores open at 6 p.m. on the holiday.)

Below, in loosely chronological order, is how this Target gets ready in the days before Thanksgiving evening.

1. The calm before the storm

Target starts planning two months in advance, thinking about crowd control practices, scheduling workers and planning on stocking and replenishing merchandise for the biggest shopping weekend of the year.

2. Earlier in the week: Starting to put the Black Friday hot sellers on the floor

Some items that Target will push over the Black Friday weekend need more room in the store, often encroaching on space normally given to other products. Take these microwaves. The retailer will stock 40 of them on an area in heavily trafficked aisle that normally holds bedding. But it will also stock the ovens where they normally live (see below), so regulars know where to look for them. And that area is also near their temporary home so that it’s easy for staff to replenish the stock.

Target this year has added maps for each store to its app so shoppers can find where the deals are, given that many items won’t be in their usual place.

3. Earlier in the week: Changing the merchandise it showcases at the end of an aisle

“Endcaps” are what retailers call the area at the end of an aisle where they stock on popular items to capitalize on the the large amount of traffic that goes by. By the time stores open on Thursday, the Target in Westbury will have changed over 100 endcaps in the store.

4. Already done : Stacking the hot sellers like toys and TVs on the floor

A lot of the hot items like FurReal toys are on already shelves, stacked high, and on the store floor, and workers have “deboxed” many more and put them in bins for quick replenishment throughout the weekend. Such products are placed prominently on the floor too.

5. Unloading extra trucks for the bonanza

The Westbury Target is 170,000 square-feet in size, making it bigger than average. To make sure there is enough inventory, Target has already received three trucks worth of merchandise, whereas a more typical Target would get one or two trucks’ worth.

6. Wednesday afternoon: Setting up the barricades for shoppers who will line up on Thanksgiving

To make sure things proceed in an orderly manner on Thursday for the doorbusters, Target will set up barricades on Wednesday (and complete the last bit of it, right in front of the store entrance) on Thursday before the opening.

7. Overnight into Thanksgiving: Setting up the hot areas like the iPad store and install the signate

Apple’s iPad will be a hot item this Black Friday weekend, and Target is giving it its own specific line, and cash registers so things move swiftly, and don’t impede customers shopping for something else. There will be balloons to alert shoppers to the iPad area. The temporary iPad lines will be set up overnight Wednesday.

During the wee hours, shoppers will be putting up signage throughout the store indicating to customers to what’s on sale. (The bin in the picture will not feature picture frames on Black Friday. These bins usually hold softer items like bedding or pillows.)

8. Thursday afternoon: Handing out tickets to guarantee the hottest items

On Thursday afternoon, Target workers will go visit customers waiting in line and hand out tickets to those wanting to buy either of the two hot TVs the retailer is offering deals on so they are guaranteed one. The idea is to free them up to shop more and not worry about getting the TV first, or risk having the shoppers leave as soon as they get the TV.

“In the past, guests would come in, get a TV, get in line, and couldn’t continue to shop—this time, they will be able to,” said Roman.

9. Thursday late afternoon: 100 or so Target staff get ready for show time

Target will staff as many as 100 people at a time in shifts over the big shopping weekend. (Wal-Mart Stores has promised to staff every single cash register in the U.S. during peak times, so Target needs to similarly be ready.)

Soon before 6 p.m., the first shift of workers will start what will be a 30-hour shopping blitz. Show time. 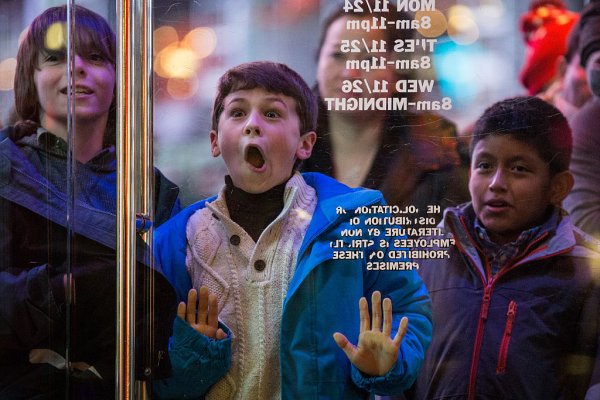 Should You Shop On Black Friday or Cyber Monday?
EDIT POST