Reverand Al Sharpton speaks at a press conference on the eve of Thanksgiving to pray and address the events of the last few days regarding the grand jury verdict of police officer Darren Wilson on Nov. 26, 2014 in New York.
Andrew Burton—Getty Images
By Maya Rhodan

The families of Michael Brown and Eric Garner, who were both killed in confrontations with police officers over the summer, are set to experience their first Thanksgivings without their loved ones. In preparation for the holiday, Rev. Al Sharpton and the National Action Network hosted a “bonding prayer” Wednesday for the two families at the civil rights organization’s headquarters in Harlem.

“Not only do they share pain of being victims of police conduct,” Sharpton said. “This will be their first Thanksgiving with an empty seat at the table”

Garner was killed after being held in a chokehold by a New York City officer. For Brown’s family, the wounds from his death are especially fresh given the grand jury decision announced this week not to indict officer Darren Wilson, who fired the fatal shots at the 18-year-old. Since the announcement of the decision, protests have sprang up across the U.S. and in Brown’s hometown of Ferguson, Mo.

“We hope that when people pull up to their tables on Thanksgiving, they pray for these families,” Sharpton said before praying that both Garner’s and Brown’s deaths “birth a new way” of handling police conduct and race relations in America. 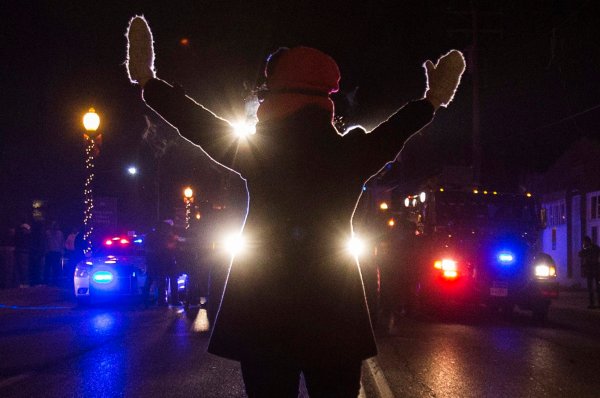