James Nachtwey, shortly after being wounded during protests in Thailand on Saturday
Jonas Gratzer
By Sam Frizell

Photojournalist James Nachtwey was shot in the leg Saturday in the violence engulfing Thai’s capital, but was not badly injured and was working again soon after being wounded.

Nachtwey has worked on contract for TIME for over thirty years, in warzones as diverse as Bosnia, Afghanistan and Iraq. His series shot in a refugee camp in Syria was featured in last week’s issue. He was not on assignment for TIME when he was wounded.

“He was hit in the leg. The bullet passed through but didn’t hit the bone. Amazingly, he went right back out and worked again,” said TIME director of photography Kira Pollack, who contacted Nachtwey by text message. “That’s who he is.”

“We are all relieved that he is ok,” she added. 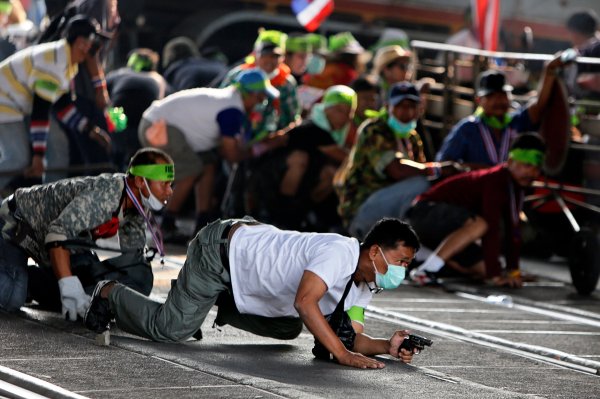