After weeks of revelations and allegations, Canadian radio host Jian Ghomeshi has been charged with four counts of sexual assault and one count of choking.

The news was announced by the Toronto Police Services on Wednesday in a statement that revealed Ghomeshi had surrendered to police and would be appearing in court later that day. He has been formally charged with “four counts of sexual assault” and one count of “overcome resistance – choking,” according to the statement which also went on to define sexual assault as “any form of unwanted sexual contact. It includes, but is not limited to, kissing, grabbing, oral sex and penetration.”

The charges mark a dramatic turn in the unfolding scandal that has gripped Canada since Oct. 26, when Ghomeshi was fired from his job at the Canadian Broadcasting Corporation (CBC). As the host of pop culture radio show Q — one of CBC’s flagship programs — 47-year-old Ghomeshi had long enjoyed celebrity status in Canada. When he revealed in a long Facebook post days later that he had been fired because he enjoyed “adventurous forms of sex” and was being smeared by a jealous ex-girlfriend, many people immediately rallied to his defense. Ghomeshi’s Facebook statement also said, “my tastes in the bedroom may not be palatable to some folks…. But that is my private life.” He also filed a $55 million (US$48.9 million) lawsuit against the CBC for breach of faith and breach of confidence.

But Ghomeshi’s post prompted the Toronto Star to publish a story they’d been investigating for months, featuring allegations by three women who said that they had been punched or choked by Ghomeshi without consent and allegations of sexual harassment by a former Q employee. The Toronto Star story inspired more people to come forward with their own allegations. To date eleven women and one man have accused the former radio host of harassment, physical abuse and sexual assault.

Many women shared explicit details of the alleged assaults. In an interview with the CBC radio show The Current, Lucy DeCoutere, an actress on the Canadian TV show Trailer Park Boys said when she’d gone home with Ghomeshi after a date, “he did take me by the throat and press me against the wall and choke me.” She added, “There was no build-up. When it went from smooching to smacking, there was no build-up.”

Another woman, lawyer Reva Seth, writing in The Huffington Post, alleged that in 2002 Ghomeshi unexpectedly attacked her one night: “Jian had his hands around my throat, had pulled down my pants and was aggressively and violently penetrating me with his fingers. When it was over, I got up and it was clear I was really angry. My sexual interactions until then had always been consensual, enjoyable and fun.”

As the story dominated Canadian media support for Ghomeshi fell away, as friends and colleagues publicly denounced his actions and offered support for the women coming forward. Toronto Police announced that their sex crimes unit had opened an investigation on Oct. 31.

CBC had also filed a notice of motion to dismiss Ghomeshi’s lawsuit on grounds the legal action was “without merit and an abuse of the court’s process,” shortly after it was originally filed. According to the Star, CBC had made the original decision to fire Ghomeshi after he came to them about potential allegations being made in the press and “showed CBC executives… a video which revealed bruising on the torso of a woman he had dated. He also showed them text messages that referred to a ‘cracked rib.’ A source said Ghomeshi had showed it as an example of how rough sex that causes bruising can be consensual.”

This week, Ghomeshi agreed to drop his lawsuit against the CBC and pay the broadcaster $18,000 (US$16,000) in legal fees, before he turned himself in to Toronto police. The last statement he made on Facebook before deleting his social media accounts, was on Oct. 30 when he wrote, “I intend to meet these allegations directly.” 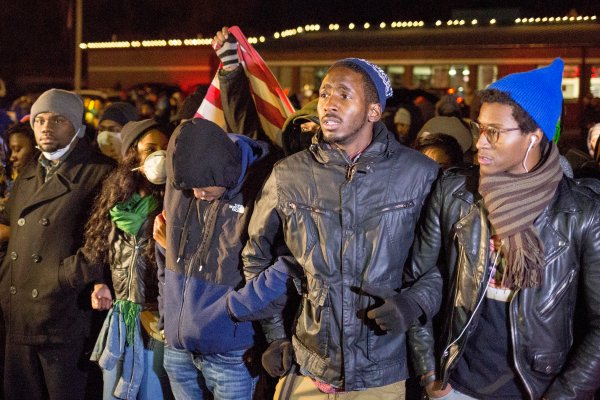 Ferguson Protesters Surge in TIME's Person of the Year Poll
Next Up: Editor's Pick