The notoriously private Angelina Jolie is finally opening up about her marriage to Brad Pitt.

In an interview with Tom Brokaw on Tuesday’s Today show, Jolie revealed that her relationship with Pitt has changed since they said “I do.”

Though they had already been together for nearly a decade prior to tying the knot on Aug. 23, she admitted that “recommitting after 10 years of being together” provided an added level of “security and comfort.”

“We were fortunate enough to be in that unusual situation where we got married with our children and they were part of the ceremony and they wrote some of the vows,” Jolie said.

That’s not all – as PEOPLE previously reported, her six children also had a hand in designing her Atelier Versace gown! Maddox, 13, and Pax, 10, walked their mother down the aisle, and Zahara, 9, and Vivienne, 6, acted as flower girls. Shiloh, 8, and Knox, 6, were ring bearers.

“[Our wedding day] was all of us agreeing to be together and to just commit to this life together,” Jolie continued. “Not because we had to or because anything was missing in our lives, but because we were absolutely sure we felt that much of a family. … It was really lovely. It was a lovely day.”

And apparently, even Oscar-winning actresses and UN special ambassadors have their moments of insecurity.

Not long after their wedding, the couple began filming By the Sea, a romantic drama set in the 1970s about a troubled marriage.

“It felt like the appropriate thing to do on our honeymoon,” she joked.

Jolie, who wrote and directed the movie, admitted that while it’s not necessarily difficult to direct your spouse, “I had moments with the actor and I’m sure he had many moments with the director.” 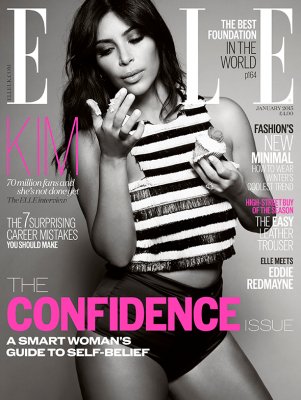 Kim Kardashian Shares Her Latest Magazine Cover With a Cupcake
Next Up: Editor's Pick