All the Ways Darren Wilson Described Being Afraid of Michael Brown

Ferguson police officer Darren Wilson is seen during his medical examination after the shooting of Michael Brown
St. Louis County
By Josh Sanburn

Police officers in Missouri, as in most of the United States, have wide latitude to use deadly force if they believe it’s necessary to prevent injury or death. Ferguson, Mo. police officer Darren Wilson apparently feared for his life multiple times before he killed Michael Brown, according to Wilson’s newly released grand jury testimony.

Wilson’s remarks were made public on Nov. 24, after the grand jury declined to charge the officer for killing Brown on Aug. 9. Below are the portions of testimony in which Wilson described his fear of the unarmed 18-year-old:

Wilson first noticed Brown and another man, Dorian Johnson, walking in the middle of the street on the double yellow line near the Canfield apartment complex. After Wilson attempted to get the two men to walk along the sidewalk, Brown eventually replied with “f— what you have to say.” Wilson testified that he attempted to get out of his vehicle, but Brown slammed his door shut.

“He was just staring at me, almost like to intimidate me or to overpower me,” Wilson said. It was then when Brown, according to Wilson, reached into his police SUV and punched him.

Wilson said that Brown went for the officer’s gun, saying: “You are too much of a p—- to shoot me.” He said Brown tried to get his fingers inside the trigger. “And then after he did that, he looked up at me and had the most intense aggressive face. The only way I can describe it, it looks like a demon, that’s how angry he looked.”

Wilson testified that his gun went off twice inside the vehicle. Brown then began to flee and Wilson followed. But Brown turned around.

“He turns, and when he looked at me, he made like a grunting, like aggravated sound and he starts, he turns and he’s coming back toward me. His first step is coming towards me, he kind of does like a stutter step to start running,” Wilson said.

“At this point,” Wilson said, “it looked like he was almost bulking up to run through the shots, like it was making him mad that I’m shooting at him. And the face he had was looking straight through me, like I wasn’t even there, I wasn’t even anything in his way.”

It was then that Wilson fired multiple rounds at Brown, from roughly 8 to 10 feet away. Wilson said that he witnessed one of those shots hitting Brown.

“And then when it went into him, the demeanor on his face went blank, the aggression was gone, it was gone, I mean, I knew he stopped, the threat was stopped,” he testified.

Read next: Darren Wilson Evidence Photos: What He Looked Like After Killing Michael Brown 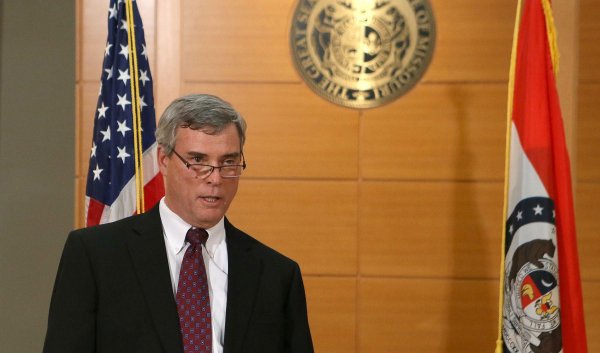