Forget the War on Christmas, There's a Real War on Thanksgiving

The “War on Christmas” is nothing more than a distraction. It’s part of a war-on-the-holidays shell game – a misdirect. While the religious right is up in arms about people saying “happy holidays,” the real battle is being fought on Thanksgiving.

You? You’re watching the wrong shell.

And we are losing the meaning of Thanksgiving.

Thanksgiving and its origins have a long and slightly contested history. The thread that runs through all those histories and origins is the thread of giving thanks for what we have. Hence, “Thanksgiving.”

We Americans are so clever, aren’t we?

The thing is, we are slowly losing that essential ingredient of giving thanks in the way we go about our Thanksgiving celebrations and it’s a big problem.

Thankfulness for what we have is essentially the holiday’s umami. Umami is one of the five basic tastes. It rounds out our culinary experience making it fuller and giving it an enjoyable, lasting aftertaste.

Appreciation for what we have does the same for Thanksgiving: it makes it a fuller experience, and it carries the enjoyment far into the future.

In many ways, it’s a life affirming experience.

Thanksgiving is becoming something much less than that because of consumerism. Consumerism pulls us further and further away from that life-affirming experience. Consumerism is serving as a giant turkey baster, sucking out the essential goodness of our Thanksgivings and basting the bottom lines of big-box stores with it instead.

With so many stores now opening their Black Friday sales on Thanksgiving Day, the irony couldn’t be any clearer.

It’s as if they are taunting us with it.

And us? We are completely buying it.

On a day about being thankful for what we have, many people will be rushing out to buy more stuff. Seriously, the irony of it all is thicker than week old, refrigerated gravy.

There is a war on Thanksgiving and the average American is slowly losing it and so many of us don’t even see that it’s happening. The tryptophan-induced malaise from a turkey holds nothing over the disconnect induced by the media’s constant bombardment of us with messages telling us we will not be happy unless we are gathering in more stuff.

Thanksgiving as a celebration and as a day of appreciation for what we already have is a threat to all of those who profit from our purchases. They are so threatened that just a single day a year set aside to be satisfied with what we have gives them the heebie-jeebies like a child at the kids’ table who’s just been served Brussel sprouts.

The profiteers see this Thanksgiving as their D-Day. D-Day on Turkey Day. This is their Normandy. They have finally made landfall and have started to swing the momentum of the battle. In making the comparison, I do not mean to take lightly the lives lost nor the reason for D-Day. I make the comparison to suggest exactly how seriously those who are waging the war on Thanksgiving are taking it.

The shell game continues. Shouts of “war on Christmas” started even before cute little ghouls and ghosts made their way around our neighborhoods on Halloween.

As the two sides of that war powered up their bullhorns to shout their messages back and forth (of which, I too am a contributor), the war machines of Wal-Mart, Target, Best Buy and so many more fired up their printing presses and spat out their consumer propaganda in full color flyers for our Sunday papers.

I choose to be a conscientious objector on this Thanksgiving Day.

I will not take part in the consumerism frenzy – not even the day after. As a matter of fact, instead of giving money to profiteers, I’ll be giving a donation to a fair wage or worker’s rights organization. I invite you to do the same!

So, on second thought, I’m mounting a protest – a sit-in, if you will. It will take place around my table and around yours. Join us! Let us gather together in chants of “we will not be moved” – and not just because the tryptophan’s kicked in.

Mark Sandlin is an ordained minister in the Presbyterian Church. 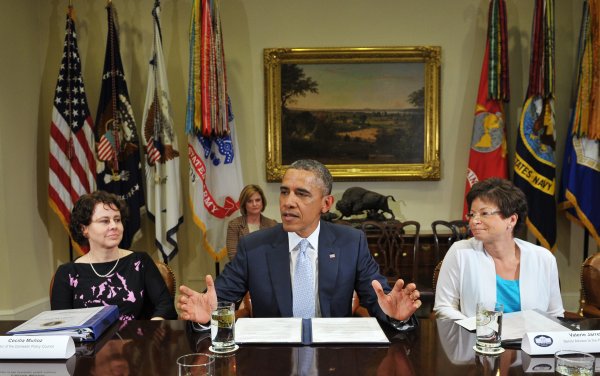 Obama's Executive Action on Immigration Will Tear Us Apart
Next Up: Editor's Pick