Ferguson Grand Jury Evidence May Not Be Released After All

Demonstrators block a busy intersection while protesting the August shooting of Michael Brown on Nov. 23, 2014, in St. Louis.
David Goldman—AP
By Josh Sanburn

If a St. Louis County grand jury does not indict Ferguson police officer Darren Wilson, evidence in the case may never be made public, despite promises from the prosecutor.

According to a letter from a St. Louis court administrator, the St. Louis County circuit court judge presiding over the case has not agreed to release evidence currently being considered by the grand jury, which was convened to decide whether to charge Wilson in the fatal shooting of Michael Brown, an unarmed African-American teenager.

St. Louis County Prosecuting Attorney Robert McCullough has repeatedly stated that he would obtain a court order to unseal grand jury evidence, an unusual step that was seen as an attempt to defuse potential anger over the decision. In a St. Louis Post-Dispatch story on Nov. 23, St. Louis County Court Administrator Paul Fox said Judge Carolyn Whittington had agreed to grant the request.

But Fox described the paraphrased quote attributed to him as “not accurate,” in a letter released after the story, and said Whittington had not made an agreement to release grand jury evidence and that any requests “will require the Court to analyze the need for maintaining secrecy of the records with the need for public disclosure of the records.”

On Monday the grand jury reconvened to determine whether to formally charge Wilson for the shooting, which sparked weeks of riots and protests in the St. Louis suburb and reignited the debate over race, privilege and police conduct in the U.S. A decision is expected soon. 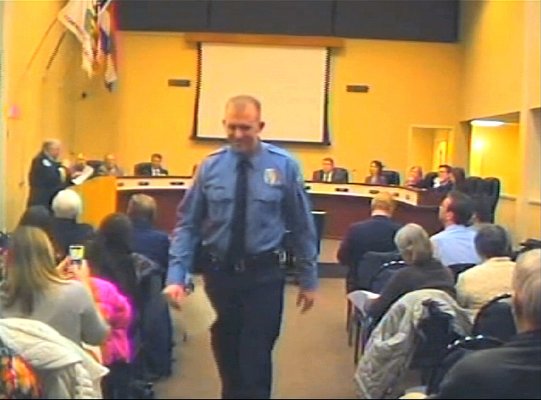 Ferguson Cop Gets Married
Next Up: Editor's Pick