Lifetime
By Olivia B. Waxman

Well, this was inevitable. By this, I mean, a movie starring Grumpy Cat, the frowning feline made famous by Reddit that, in the last two years, has become the spokescat for Friskies cat food and boasts two books, a toy line and a possible Hollywood movie deal — all while hobnobbing with Jennifer Lopez and Seth Meyers. (For the uninitiated, the permanent frown is the result of feline dwarfism.)

The gist of Grumpy Cat’s Worst Christmas Ever, premiering at 8pm ET on Lifetime: a girl who feels like she doesn’t have friends to hang out with during the holiday season discovers she can talk to Grumpy Cat. So she breaks into a mall to see the feline and gets in the middle of an attempted robbery, chasing down bad guys who threaten to ruin Christmas.

Still want to tune in? Well, because it’s Saturday night, and Aubrey Plaza, the Parks and Recreation star who voices the cat, recommended Jimmy Kimmel watch it while tipsy, use this drinking game (trust me, she’s right). So if you can drink responsibly, or have a designated driver, then take one sip when…

When the cat is not on screen — which feels like most of the film — you’ll find yourself waiting for laugh-out-loud moments. But alas, my expression was much like Grumpy Cat’s — grimacing and droopy-eyed with boredom.

Just as her books leave much to be desired because they are mostly pictures of Internet memes you could easily find on Google Images, watching the cat just sit there — and be…a cat — gets old quickly. Grumpy Cat may be trying to be the 21st century version of the Grinch, but at least the story of the Grinch was made up of delightful Dr. Seuss witticisms — Grumpy Cat’s lines are not anywhere near as clever.

That said, watching this flick will make you feel less guilty about taking a break to watch a cat video every now and then. At least those clips are only a minute or two long. This Lifetime movie is nearly 2 hours long.

So if you’re still deciding whether to tune in — or tough it out — remember: cats may have nine lives, but you only have one. You’ll never get this time back. 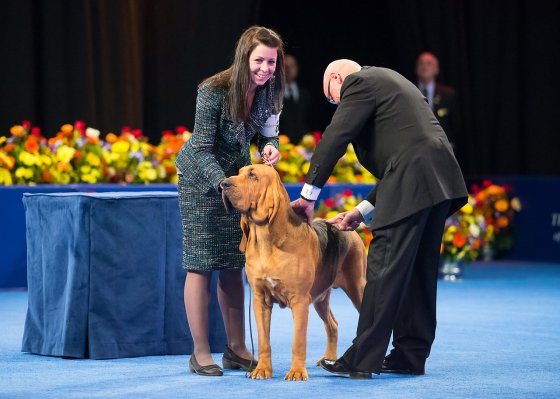 National Dog Show Winner Having Best Thanksgiving Ever
Next Up: Editor's Pick