China appears to be building an island large enough to carry an airstrip in a disputed part of the South China Sea.

This is the fourth such Chinese project in the archipelago, located between the Philippines and Vietnam, and by far the largest.

Tensions have run high in the South China Sea for decades, but especially since the recent discovery of oil-and-gas deposits in the region. Earlier this summer, China and Vietnam came at loggerheads over the Chinese deployment of an oil rig in contested waters.

If China does build an airstrip on Fiery Cross Reef, it would put Beijing on a par with Taiwan, the Philippines, Malaysia and Vietnam who all have such capability in the Spratlys.

“It appears that’s what they’re working toward,” U.S. military spokesman Lieut. Colonel Jeffrey Pool told Agence France-Presse. “We urge China to stop its land-reclamation program, and engage in diplomatic initiatives to encourage all sides to restrain themselves in these sorts of activities.”

Fiery Cross Reef was previously only equipped with a concrete platform, operated by China’s People’s Liberation Army Navy. The platform hosts a garrison, a pier, air-defense guns, antifrogmen defenses, communications equipment and a greenhouse, and may soon be connected to the new island.

The dredgers currently at work on the reef are also creating a harbor that appears big enough to receive tankers and major surface combatant vessels. 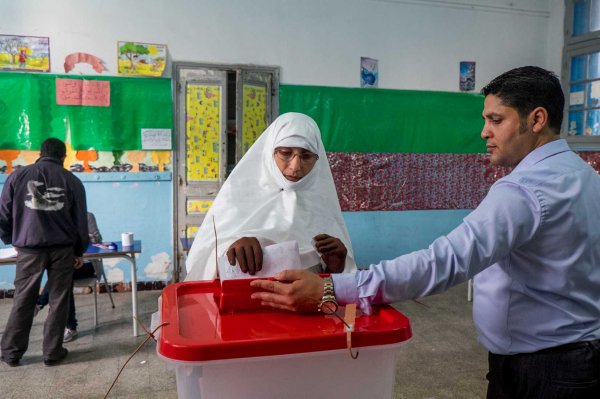 Tunisia Polls Headed for Runoff
Next Up: Editor's Pick