President Obama has rolled out his executive action on immigration with a talking point that guts the meaning of a word for political ends. As a general rule, democracies should take notice when their leaders do this.

“I know critics call this ‘amnesty,'” he said today in a speech in Nevada, describing his decision to give temporary legal status to millions of undocumented immigrants. “It’s not amnesty. Amnesty is what we have now.”

The Merriam Webster dictionary, an American English standard, gives us this definition of “amnesty”: “the act of an authority (as a government) by which pardon is granted to a large group of individuals.” The Oxford dictionary gives two definitions: “an official pardon for people who have been convicted of political offenses” and “an undertaking by the authorities to take no action against specified offenses or offenders during a fixed period.” The word “pardon” in both cases is defined to mean a forgiveness for an offense.

As a word in politics, “amnesty” has been as contested as any in recent years. What is not contested is the fact that those immigrants who reside in the United States without documentation have broken the law, even if that law is not widely enforced. In Arizona v. United States, the recent Supreme Court case that overturned a harsh state immigration law, Justice Anthony Kennedy summed up current federal law like this: “Unlawful entry and unlawful reentry into the country are federal offenses. Once here, aliens are required to register with the Federal Government and to carry proof of status on their person. Failure to do so is a federal misdemeanor.” The punishment can include a small fine, possible imprisonment and, “upon the order of the Attorney General,” removal from the country.

Opponents of comprehensive immigration reform label any effort “amnesty” if it treats undocumented immigrants with any official leniency short of prompt punishment under current law and deportation. For the pro-immigration reform camp, a reform proposal is only “amnesty” if it fails to include some penalty, even a different one than those prescribed, for having initially broken the law. This camp argues that the Senate-passed immigration reform proposal, for instance, was not “amnesty,” since it required immigrants to pay a fine before establishing a legal path for them to stay in the country.

President Obama is doing something more convoluted and alarming with the word “amnesty” than both of these camps. His action grants temporary and revokable work permits and legal status to millions of undocumented immigrants in the United States, if they pay back taxes and pass a background check. There is no fine. He is taking these actions under current law, using the discretion given to the Attorney General over enforcement. He argues that this is not “amnesty,” even though he is granting clear temporary forgiveness, since there is no official pardon, just a mass delay of enforcement.

But Obama goes further. “Amnesty is what we have now,” he says of the current system, in which millions live in violation of a law that is generally not enforced. The suggestion here is that the current lack of enforcement is itself a sort of unofficial pardon. So he is arguing at the same time that granting a new pardon is not amnesty and that allowing an existing pardon to continue is amnesty. He can’t have it both ways.

These two conflicting thoughts become harder to manage when the pardons are compared to each other. The White House says that the core rationale for the President’s actions is “humanitarian,” since the new rules will make it easier for families with undocumented parents and documented children to stay with each other. Implicit in this is the conceit that the new pardon (a temporary work permit and legal status) is less severe than the old pardon (a lack of enforcement).

Those undocumented immigrants who do not receive the President’s dispensation will be undeniably worse off: they will continue to live under the threat of deportation, they will be restricted in their ability to travel outside the United States, and they will continue to lack the ability, in most cases, to find legal employment. President Obama is not arguing otherwise. The premise of his action is that he is making the lives of 5 million better and more fair.

In the end, Obama has made a mush of meaning. Why does this matter? Because words matter. They mean specific things. And that meaning must be defended, because words facilitate the basic premise of open and honest debate that undergirds a democratic system. As George Orwell wrote, in the definitive essay on this topic, “[I]f thought corrupts language, language can also corrupt thought.” War is not peace. The sun is not blue. Six is not less than five.

There are lots of ways Obama could have chosen to make his case that his executive actions provide the nation an improvement over the status quo. Corrupting the meaning of a word, however, is not a noble one, nor is confusing the debate. It is, to use another word with a clear meaning, deceptive. 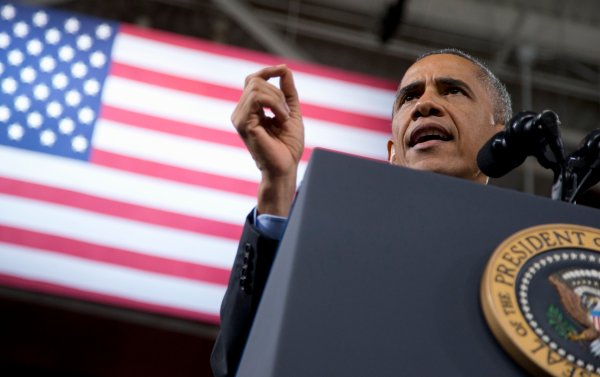 Obama Ups the Ante in Vegas
Next Up: Editor's Pick