President Barack Obama took his immigration actions on the road Friday, trumpeting in a speech in Las Vegas his announcement that his administration would defer deportations for roughly five million illegal immigrants.

Addressing a raucous audience at a local high school a day after laying out his announcement in a primetime address to the nation, Obama rejected the complaints of congressional Republicans that his actions were unlawful or an overreach, saying he had given Congress plenty of time to take action and “we can’t afford” to wait any longer.

“I told [Speaker of the House] John Boehner I would—yeah, I’ll wash your car, I’ll walk your dog—whatever you need to do, just call the bill,” Obama said, complaining that House Republicans refused to take up the Senate-passed bipartisan immigration reform bill. “That’s how democracy is supposed to work. And if the votes hadn’t been there, then we would have had to start over, but at least give it a shot. And he didn’t do it. And the fact that a year-and-a-half has gone by means that time has been wasted—and during that time families have been separated, and during that time businesses have been harmed.”

Obama said lawmakers who question his authority to act have a simple recourse: passing a comprehensive immigration bill for his signature. “When members of Congress question my authority to make our immigration system work better, I have a simple answer: pass a bill,” Obama said as the audience cheered and chanted “Si, se puede.” “Pass a bill. Pass a bill. Nobody is stopping them from passing a bill.”

Before deplaning Air Force One, Obama signed two memoranda to develop policies to better help integrate immigrants into the United States and improve the immigration visa system. Separately, the Department of Homeland Security released memoranda on efforts to improve border security, end the controversial “Secure Communities” program and employ prosecutorial discretion to allowing many illegal immigrants to remain in the United States. “Under this revised policy, those who entered illegally prior to January 1, 2014, who never disobeyed a prior order of removal, and were never convicted of a serious offense, will not be priorities for removal,” the department said of a policy that will take effect on Jan. 5, 2015. DHS also announced that it would begin accepting applications within the next 180 day for the expanded deferred action program, which would allow millions of immigrants to remain in the U.S. legally for three years on a renewable basis.

Obama said he understood the worries of those concerned about the impact of immigration on their jobs and the “fabric of our country,” but said he also heard the concerns of the so-called Dreamers who were brought to the U.S. illegally as children and of the American citizens with family members who immigrated illegally to be near them.

“We’re not a nation that kicks out strivers and dreamers who want to earn their piece of the American dream,” Obama said. “We’re a nation that finds a way to welcome them. We make them earn it, but we welcome them in as fellow human beings, fellow children of God, and we harness their talents to make the future brighter for everybody.”

The executive actions put pressure on Republicans who have strenuously objected to Obama’s process, while the substance of his announcements places the GOP in a bind with an ever-more-diverse presidential electorate. 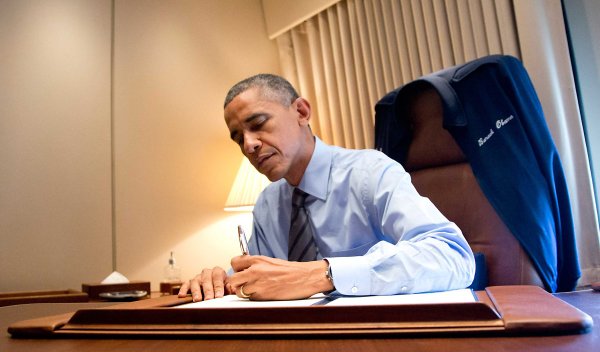