Is Obama Overreaching on Immigration? Lincoln and FDR Would Say 'No'

Last night, President Obama announced new steps that will allow about five million undocumented immigrants to obtain work permits and feel free of imminent deportation. Given that we now have an estimated 10–11 million such people within our nation and that many of them clearly will never leave, this seems a reasonable first step towards giving them all some kind of legal status. But, because of the anti-immigration stance of the Republican Party, which will entirely control Congress starting on Jan. 3, the President will have to base this step solely on executive power. And even before the President spoke, various Republicans had accused him of acting like an emperor or a monarch and warning of anarchy and violence if he goes through with his plans.

There are, in fact, substantial legal and historical precedents, including a recent Supreme Court decision, that suggest that Obama’s planned actions would be neither unprecedented nor illegal. This is of course the President’s own position, that no extraordinary explanation is needed—yet we can also put his plans in the broader context of emergency presidential powers, which in fact have a rich history in times of crisis in the United States. It is not accidental that this issue of Presidential power is arising now, because it will inevitably arise—as the founders anticipated—any time a crisis has made it unusually difficult to govern the United States. Like Abraham Lincoln and Franklin Roosevelt, Obama occupies the White House in a time of great crisis, and therefore finds it necessary to take controversial steps.

The Founding Fathers distrusted executive authority, of course, because they had fought a revolution in the previous decade against the arbitrary authority of King George III. But, on the other hand, they had come to Philadelphia in 1787 because their current government, the early version of the U.S. system established by the Articles of Confederation, was so weak that the new nation was sinking into anarchy. So they created a strong executive and a much more powerful central government than the Articles of Confederation had allowed for—and having lived through a revolution, they also understood that governments simply had to exercise exceptional powers in times of emergency.

They made one explicit reference to an emergency power, authorizing the federal government to suspend the right of habeas corpus—freedom from arbitrary arrest—”in cases of rebellion or invasion [when] the public safety may require it.” Nearly 80 years later, when the southern states had denied the authority of the federal government, Abraham Lincoln used this provision to lock up southern sympathizers in the North, and eventually secured the assent of Congress to this measure. He also used traditional powers of a government at war—including the confiscation of enemy property—to emancipate the slaves within the Confederacy in late 1862. With the help of these measures, the North won the war and the Union survived—apparently exactly what the Founders had intended.

When Franklin Roosevelt took the oath of office in the midst of a virtual economic collapse in March of 1933, he not only declared that the nation had “nothing to fear but fear itself,” but also made clear that he would take emergency measures on his own if Congress did not go along. That spring, the country was treated to a remarkable movie, Gabriel Over the White House, in which the President did exactly that—but as it turned out, the Congress was more than happy to go along with Roosevelt’s initial measures. It wasn’t until his second term that Congress turned against him; he, like Obama, used executive authority to find new means of fighting the Depression. In wartime he also claimed and exercised new emergency powers in several ways, including interning Japanese-Americans, this time without a formal suspension of habeas corpus. In retrospect both a majority of Americans and the courts have decided that some of these measures, especially the internment, were unjust and excessive, but the mass of the people accepted them in the midst of a great war as necessary to save the country, preferring to make amends later on. Though opponents continually characterized both Lincoln and FDR as monarchs and dictators trampling on the Constitution, those are judgments which history, for the most part, has not endorsed.

As the late William Strauss and Neil Howe first pointed out about 20 years ago in their remarkable books, Generations and The Fourth Turning, these first three great crises in our national life—the Revolutionary and Constitutional period, the Civil War, and the Depression and the Second World War—came at regular intervals of about 80 years. Sure enough, just as they had predicted, the fourth such great crisis came along in 2001 as a result of 9/11. President Bush immediately secured from Congress the sweeping authority to wage war almost anywhere, and claimed emergency powers to detain suspected terrorists at Guantanamo. (Some of those powers the Supreme Court eventually refused to recognize.) The war against terror was, however, only one aspect of this crisis. The other is the splintering of the nation, once again, into two camps with largely irreconcilable world views, a split that has paralyzed our government to an extent literally never before seen for such a long period. Immigration is only one of several problems—including climate change, inequality and employment—that the government has not been able to address by traditional means because the Republican Party has refused to accept anything President Obama wants to do.

The Founders evidently understood that when the survival of the state is threatened, emergency measures are called for. We are not yet so threatened as we were in the three earlier crises, but our government is effectively paralyzed. Under the circumstances it seems to me that the President has both a right and a duty to use whatever authority he can find to solve pressing national problems. Congressional obstructionism does not relieve him of his own responsibilities to the electorate. 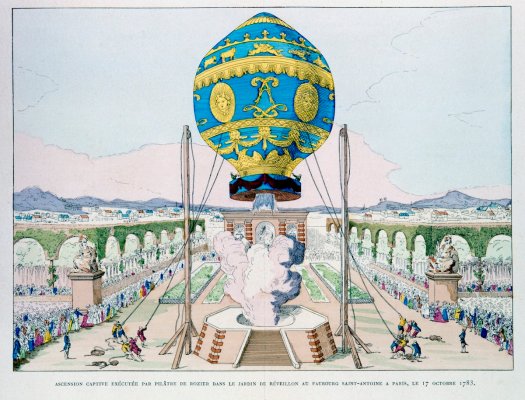 A Sheep, a Duck and a Rooster in a Hot-Air Balloon — No Joke
Next Up: Editor's Pick