It’s that time of year again, when Americans baste turkeys, bake pies and give thanks. This year, public figures shared with TIME their diverse gratitude–from a Nobel winner thankful for new light to a former President’s embrace of his ever growing family. See the full collection at time.com/timethanks.

I’m thankful for my grandmothers. One kook, one straight shooter, they led me by example. They taught me that women are real human beings, not idealized one-dimensional accessories.

The 41st President of the United States

From my bride of nearly 70 years, to our caring and giving children and grandchildren, and now to our four great-grandchildren (with another one on the way!), my cup truly runneth over. I continue to marvel at the neighbor-helping-neighbor spirit of the American people–something I call being a Point of Light. I’m thankful not only for every man and woman who wears our nation’s uniform to defend our liberties and cherished way of life, but also for their families, who help bear this necessary burden. They do so not for fame or fortune but for love of country. For these blessings, for the many opportunities we had to serve our country, for parachutes that work and for so many friends who make life sing, I am truly thankful–always have been and always will be.

The 68th U.S. Secretary of State, who also served four terms in the Senate

When I was an 11-year-old kid, I spent Thanksgiving in a bitterly divided Berlin, in deep trouble after I’d biked through the Brandenburg Gate to explore East Berlin. Fifteen years later, I marked the holiday with five fellow sailors and a lukewarm plate of scrambled eggs on a patrol boat in Vietnam. In 2007, I spent Thanksgiving weekend with Nelson Mandela.

I am thankful this year for a world that proves near miraculous change is possible: where Cold War rivalry gave way to a united Germany and a democratic Europe, where war-torn Southeast Asia became a magnet for growth and where the era of apartheid ended with the dawn of a new era marked by reconciliation and truth.

Faith in our collective power to resolve intractable problems is a gift that should inspire us all this Thanksgiving. I give thanks for the activists and “troublemakers” across the globe who speak up for better government and the rule of law; for those who defend dignity and rights while honoring the rights of others; for our armed forces and diplomats; and for all who rebel against the counsels of complacency and defeatism and who welcome the opportunity to achieve what others say cannot be done.

I’m thankful for my family, as it expands in very wonderful directions. This Labor Day, my son Kevin proposed to his boyfriend Kyle. On paddleboards. In the middle of a lake. With a handmade titanium earring shaped like the infinity symbol. Every time I look at Kyle’s engagement earring, I silently hope that other LGBTQ people will have the same joy in their lives as he does at this moment.

I’m thankful for the people willing to be crazy in their time–not for themselves or for their time, but for a future they know must be. The abolitionists, decades before the 13th Amendment ended slavery. The women who thought the 14th Amendment secured equality to them too, a century before the Supreme Court agreed. Or my current favorite, Doris Haddock, a.k.a. Granny D, who on Jan. 1, 1999, at the age of 88, began a walk across the United States with a sign on her chest that read, “Campaign Finance Reform.” These people sacrifice something in the present for something important in the future. They have, as Vaclav Havel puts it, not optimism but hope. The certainty that their cause makes sense. That it is just. And that someone, sometime, has finally got to stand up for it.

Even on my worst days, the instant softening and loving that my son gives me without ever knowing he’s doing it, without any premeditation or self-consciousness, is something I could never have imagined, yet always dreamed of.

I’m thankful for the impact that LED lighting has on the world: energy-efficient, high-quality yet low-cost lighting can positively impact many people in need around the globe.

Director of the U.S. Centers for Disease Control and Prevention

This Thanksgiving Day, 170 CDC disease detectives, public- health experts and communication specialists will be in West Africa, fighting the Ebola epidemic. They aren’t doing it to get rich or famous, and they won’t get thank-you letters from the millions of Americans and others around the world who won’t get sick or injured because of their work. But we all owe them thanks for the work they do to keep us safe and healthy.

As a former foster mom to 23 at-risk girls, I am thankful for the many Minnesota heroes who care for foster children and adopt them: Mark and Julie Martindale of Elk River, who have adopted nine children with disabilities; the Malikowskis of Sartell, who adopted their daughter from Ethiopia; and the Ryghs of Bayport, who adopted their son from Jamaica.

In the United States, there are 400,000 children living without permanent families. Of those, more than 100,000 children are eligible for adoption. Each year, 23,000 of them will simply age out of the foster-care system without finding permanent homes.

Nov. 22 is this year’s National Adoption Day. As you join your families for Thanksgiving, think about how you can make a difference in the life of a child in foster care. Every child, regardless of age, nationality or circumstance, deserves a chance at a forever family. With your help, we can make sure that every child waiting for a family has a place to call home for the holidays. 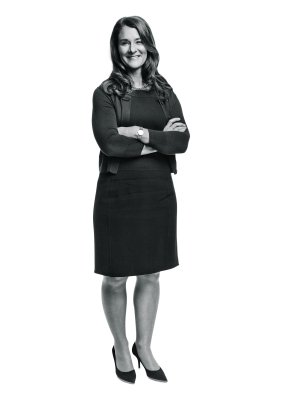 10 Questions With Melinda Gates
Next Up: Editor's Pick