On the Long Island set of Peter Pan, construction is still underway on Captain Hook’s ship. The production’s dog trainer is practicing in the Darling children’s bedroom with the gray mix-breed playing Nana — as well as with the dog’s stand-in, there for insurance purposes. Christopher Walken, who’s still working out what will be the right wig for his role as Captain Hook, hasn’t even been called to the set yet. And dancers in T-shirts are lifting a petite brunette starlet in braids, black workout gear, and a pair of boys’ brown boots onto their shoulders as she performs a song that’s been vetted to ensure it’s less offensive than it was in 1954, when it was first performed. After the dancers are dismissed, our starlet is going to spend an hour practicing flying on wires.

Welcome to the future of TV.

NBC’s Peter Pan Live!, starring Girls actress Allison Williams as the titular nymph and Christopher Walken as Captain Hook, represents the glimmering of what may become an annual franchise — like the Oscars or Super Bowl, but featuring Broadway-trained dancers instead of Jennifer Lawrence or Eli Manning. It’s old-school and studiously un-hip, and it’s also very, very live.

“I did not for a second hesitate about any of those things that should have scared the pants off of me,” Williams tells TIME in her trailer, on a break from rehearsing the number “True Blood Brothers,” in which she’s carried across the stage by dancers and then executes a still-in-progress complicated handshake with Tiger Lily (who’s now called an “Islander,” not an “Indian”). “I should have been really worried about the live-ness.”

She had ample warning. Last December’s broadcast of The Sound of Music garnered a shocking 18.5 million live viewers the night it aired — dazzling numbers for an entertainment broadcast in the DVR age, thanks in some part to viewers tweeting about the show as it aired.

“No one had done it since the fifties,” says Craig Zadan, co-producer with Neil Meron of The Sound of Music and Peter Pan, as well as the Academy Awards ceremony the past two years and next. (He helped oversee Ellen DeGeneres’s celebrity selfie and her pizza delivery to the Dolby Theatre.) “Live TV is the future. It’s the only way you can beat the DVRing of America. Everything is DVRed and no one watches stuff when it’s on. Awards shows and sports are watched when they’re broadcast.”

Such was the thinking behind The Sound of Music, brought to production by a network head, Robert Greenblatt, whose famous love of theater had previously resulted in the backstage-Broadway cult classic Smash. People watched both out of sheer novelty, and because their Twitter feeds told them Audra McDonald was doing something special as Mother Superior, and because of the high expectations around whether lead actress Carrie Underwood could live up to a very famous character. The country singer was compared negatively to Julie Andrews so much on social media that she tweeted after the show “Mean people need Jesus.”

Underwood had been mocked from the jump: “Will people buy all the casting choices? Last year, obviously, there was a certain reaction to certain things and we all just rallied behind each other and did the best we could,” says Christian Borle, the only lead actor to appear in both The Sound of Music and Peter Pan (he’s playing both Smee and Mr. Darling).

But it’s all good, as far as the production side goes. Zadan, who compared the Oscar show to “blood sport,” says: “The people with mean things to say, say them. At the end of the day, the mean things and the good things only drive viewership. So what do you want? You want the ratings.”

The show is hardly meant to be as seamlessly executed as a filmed drama — the visible wires are part of the charm. Greenblatt, the president of NBC who’s placed a long bet on live TV (including a planned live staging of Aaron Sorkin’s play A Few Good Men), isn’t planning for a Sound of Music-sized success this year, calling himself “pretty Zen” and noting, “I don’t expect lightning to strike twice.” And he’s as sanguine about the challenges, and charms, of live TV. “When I first looked at the early promos, I saw wires, and I wanted to cut them, but it’s a live show! It’s theatrical. You can’t remove them in the live broadcast, so why not get people used to it?”

After all, the theatrical production of Peter Pan has traditionally had as its climax a moment when the audience must clap if they believe in fairies — asking viewers to surrender themselves as fully to showbiz myth as Greenblatt and his players have been. “If you’re looking for anything in live TV, you want the little bobbles along the way!,” says Greenblatt, reminiscing about a live production he saw in which Sandy Duncan vamped her way through a technical difficulty. There will be some haters in the house, sure, but there will also be honest curiosity around how this all gets executed. “If anything’s going to go wrong, it’d go wrong during Peter Pan, not The Sound of Music,” says Zadan.

But Williams is hoping that viewers concentrate on the aspects that work, noting in a conversation in her trailer on set that she refused to read comments on her own Instagram post in which she appeared in costume as Peter. “It’s too meaningful for me to read it,” Williams says. “I’ll read what people say about my recent Allure cover, because, who cares? That’s my face! I don’t care — I’ve heard it all! But there’s something so personal to me about Peter, and it hurts me so much when people look at him through a cynical lens, and look at this whole thing through a cynical lens. I’m like, ‘You’re literally looking at this through the wrong viewfinder!’”

As for the viewfinder through which Pan fans, and aimless detractors, should see the show, Williams has a recommendation: “If you’re going to watch this the same way that you watch a TV show that you hate, but you hate-watch it with all your friends so that you can drink wine and tweet at each other about how it’s bad, you need to just go ahead and take those lenses out of your glasses and put in the lenses that you had when you were six.”

As an actress, Williams is aware that her fans are used to seeing her playing cynical — she noted in an interview that journalists are usually “Marnies,” the aggressive, pushy sort of person she plays on HBO’s Girls. Williams calls the new role a “180-degree turn” from her pay-cable persona, then revises. “Or 179, so we can keep going, but not from whence we came, and keep making changes that are different.” Those changes are set to continue with the American Songbook concert at Lincoln Center she’s pulling together, one that will go on once she’s broken free of Peter’s register, which is lower than her own natural soprano. “I have a longstanding dream to make an album,” she says.

That dream begins with Peter, a role that demands an hour of flight before and after the all-day rehearsal with cameras. By comparison, her costar Walken has it easy. Asked if he had a voice coach, the Oscar-winning actor tells TIME: “They said to me, ‘Do you want a coach?’ I said, ‘Sure, but for this, it’s just too late.’ It is what it is. The songs are — I kind of sing a little bit, then I start to talk.”

“When you have children and dogs and flying and Christopher Walken,” Borle says, laughing, “it’s fantastic.”

And the show’s star, for one, is hoping both for a ratings success and for acceptance for what NBC is trying to create. “It’s a new genre,” says Williams. “It’s television and musical theater, and it’s not either one of those alone, and at times it’s more of one than the other. People watched The Sound of Music wanting it to fail, and I know that people will watch Peter Pan that same way, but I would hope that the strong among them would watch thinking lovely and wonderful thoughts.” 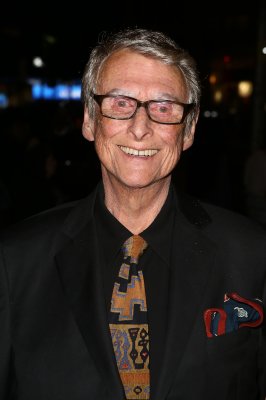 My Movie with Mike Nichols
Next Up: Editor's Pick