Wendy Davis: What I'm Thankful For

Though the outcome of my Texas gubernatorial race was not as I had hoped it would be, it is impossible to look back over my journey this past year without a sense of tremendous gratitude. Of awe, really.

I am in awe of the people I met, people who told me I had inspired them to believe it was possible to elect someone who understood their struggles. Truth be told, it was they who inspired me. Voices that had been held down and pent up for decades cried out and demanded to be heard in the most incredible exercise of democracy and determination and just plain old raw fight that Texas has seen in decades.

From Maria in Mission, Texas, who sold her truck to buy a shaved ice machine and open a little raspas stand inside a gas station in order to make sure that her daughter and her grand-daughter would have a chance at a better life. When I first met her, she hugged me close and with tears in her eyes said, “I have very little to give, but what I have, I give to you.” And she did. She gave her whole heart, her every spare moment to our efforts here.

To Katy in Houston, Texas whose life was saved six years ago because of a breast cancer screen, and who gave the campaign all the effort she could lend it in order to make sure that all women in Texas have access to that same lifesaving healthcare.

To the 66 year old woman in Dallas who was afraid to vote because she can’t read but was brave enough to request a ride to the polls because she wanted to play a part in creating a Texas where her children and grandchildren wouldn’t be afraid – where they would have the promise of education and live out the promise of their dreams.

These inspirational people and so many tens of thousands more, buoyed me on tough days and helped me understand how very important it is to fight for causes we hold dear. Even if the fight is tough. Nothing about our fight was simple. But, fighting for what you believe in never is.

As I reflect on the blessings of this past year, there is one thing that I know to my core – that the true test of justice and fairness and freedom lies somewhere within each of our hearts. And whether or not we ultimately succeed or fail has everything to do with our belief and our will and the power of our own voices. The people of Texas have taught me that. And I am so grateful for the people of this incredible state I am privileged to call home. I am grateful for every hug, every prayer, every effort given on behalf of what we were fighting for.

No, we didn’t succeed this time. But as Jacob Riis, a 20th century muckraker said, “When nothing seems to help, I go and look at a stonecutter hammering away at his rock perhaps a hundred times without as much as a crack showing in it. Yet at the hundred and first blow it will split in two, and I know it was not that blow that did it – but all that had gone before.”

Each blow struck in the name of equality and fairness and justice – each matters. I am thankful to have had the privilege of carrying the hammer for a while. And I look forward to picking it up again soon.

Wendy Davis is a U.S. State Senator from Texas. 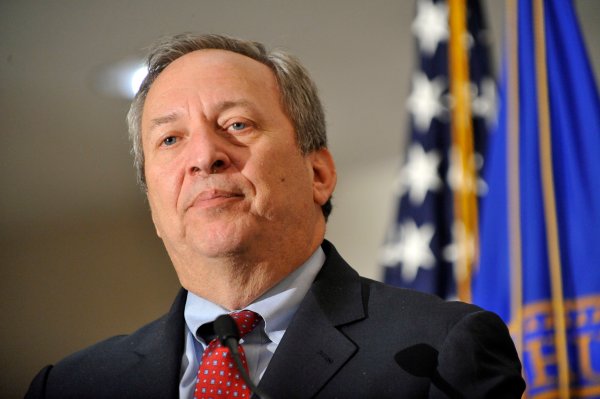 Larry Summers: What I'm Thankful For
Next Up: Editor's Pick