Ryan Reynolds: What I'm Thankful For

Cast member Ryan Reynolds arrives for the "The Voices" gala during the Toronto International Film Festival in Toronto on Sept. 11, 2014.
Mark Blinch—Reuters
By Ryan Reynolds

Actions speak louder than words. And for one particular memory I have, the action was deafening. I’m the youngest of four brothers. Being the youngest, I often felt less like a little brother and more like a moving target. Growing up, all four of us were at war under our roof. Alliances were forged and broken daily. As the smallest and youngest, they reserved their most unique and unblinking brand of torture for me. But on occasion, they also unwittingly taught me about rising to the occasion. And for this, I’m grateful. Doing the right thing at the right time speaks volumes about one’s character. Especially when it’s wholly unexpected. As is so often the case with young boys, acts of kindness were like Blue Moons: rare and spectacular.

Growing up my father was – at least in our eyes – the toughest man alive: a former cop, former boxer and full-time landmine. He worked tirelessly to provide for his family and in return, you were expected to do what he said, often before he said it. It was a somewhat impossible situation for any normally functioning nervous system. In a word, he was scary. Not because he was sadistic or physically abusive. He was scary because he was one of those people with an energetic ‘weight’ to him. He could snatch the life right out of you with a simple look. Shifting his weight ever so slightly from one foot to another could transform an otherwise delightful 6th birthday party into what felt like an Irish funeral.

When I turned 13, I decided to test the waters of questionable fashion and independence by procuring myself… an earring. I was terrified. Not terrified to have a hole punched through my virginal ear, but terrified about the hole that would be punched through my future, when my father found out. I had a totally baseless and illusory idea that revealing this plan to my older brothers would elicit some form of support, or at minimum, empathy. Early that morning, I told them about the bold step I was planning to take after school, in the hope some kind of wartime bond would fuse us together as one imposing unit… Wrong.

My brothers were characteristically detailed with their feelings on the matter. My oldest brother told me I was going to die tonight. Like, DIE. “Do NOT do this. If Dad sees that thing in your ear, he’s gonna release your soul to the wind.” My middle brother bluntly stated that, “Bad call. Dad’s going to turn you into a liquid, dumb-ass.” And my other brother took umbrage in the act itself, “Earrings on dude’s are lame. Especially on a dude.”

13 years old is generally the age in which most young people begin to uncap the high-pressure pipe of bad decisions boiling just under the surface. I was ready for it. Or it was ready for me. It goes without saying I wasn’t going to get permission from either of my parents. So I found a grey area to exploit: enter my friend, Dimitri Barboudis. He was already planning to go to Sears with his Mom, Voula, to get the deed done himself. Voula graciously signed the consent form for me as her “other” slightly less Greek looking son. Shortly before 4pm, on a rainy day in Vancouver, British Columbia, my fate was punctuated by a tiny gold stud fired through my fleshy, pre-pubescent earlobe. It didn’t even hurt… probably because the hurt was yet to come.

Keep in mind this was a long time ago. Mindsets weren’t particularly inclusive or understanding of “alternative” self-expression. At our home, blue socks would be considered rebellion. Having a pierced ear was tantamount to walking into the kitchen wearing an evening gown… if one could bedazzle active grenades to an evening gown.

No longer in the custody of Dimitri and his liberated Mom, I said my goodbyes and began the slow, aching walk home. I could hear the words, “dead man walking” echoing off all the extra room in my skull. Arriving home, I stayed hidden in my brother’s bedroom listening to whatever crap music a 13 year-old boy listens to. Eventually, I heard my Mom call us to dinner. It was “go time”. I hadn’t seen my brothers at all that afternoon and I imagined they were steering clear of the impending rage-meal I was about to consume.

Arriving at the dinner table, my face was numb and my ear was HOT. The little gold earring felt like it was flashing ember-red, as if to say, “LOOK AT ME!!! Over here! Your son is a tool! You raised a future Zen-garden salesman who collects artisanal bongs!”

I sat quietly, staring at the only friend I had: my lap. Every muscle in my body was rigid with fear and disgust with myself. I could hear my brothers enter the room together and solemnly shuffle their way to their usual seats. My Father’s measured breathing puffed to my left while my Mother took her seat to the right, seemingly unaware of the ticking bomb affixed to my ear. Dad’s eyes scanned the room like a flashlight thru fog. I anxiously waited for the beam to find me. When his eyes stopped scanning and rested in my direction, I held my breath and tensed my stomach. Before I could utter a single futile syllable he said… “Pussies.” My head snapped up immediately. I could see he wasn’t just looking at me. His confused eyes darted spastically between all four boys in shock, disbelief and directionless anger. What he was in fact looking at, were four young men, sitting at a dinner table, each, with a freshly pierced ear.

And a big Blue Moon rose to the occasion: rare, and pretty damn spectacular.

Ryan Reynolds is an actor. 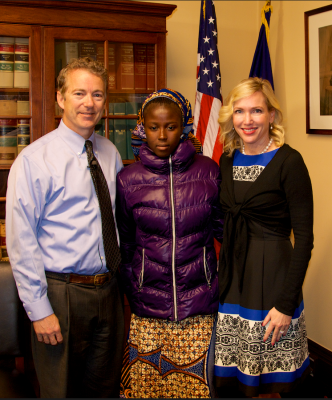 Rand Paul: What I'm Thankful For
Next Up: Editor's Pick