Republicans Brace for an Immigration Fight With Obama

Speaker of the House John Boehner (R-OH) holds a news conference with the newly-elected members of the House GOP leadership at the U.S. Capitol in Washington on Nov. 13, 2014.
Chip Somodevilla—Getty Images
By Alex Rogers

After President Barack Obama announces executive actions expected to shield five million undocumented immigrants from deportation Thursday, Republicans will scream that he doesn’t have the authority to do so and use Obama’s own words to make their case. Indeed, they already have.

“If ‘Emperor Obama’ ignores the American people and announces an amnesty plan that he himself has said over and over again exceeds his Constitutional authority, he will cement his legacy of lawlessness and ruin the chances for Congressional action on this issue—and many others,” Michael Steel, a spokesman for House Speaker John Boehner, said in a statement Wednesday, referring to when Obama said last year that he has “obligations” to enforce current immigration laws as he is “not the emperor of the United States.”

But besides press releases and floor speeches, what can Republicans do? So far, Republican lawmakers have indicated they could move to defund certain programs and sue the President, a move many immigration legal experts say would likely fail in court. It appears neither option is very good.

“It’s hard to defund inaction,” Ohio Republican Rep. Steve Stivers said of Obama’s expected move to temporarily defer deportations. “So we’re struggling to figure out what our real options are.”

Kentucky Republican Rep. Hal Rogers, who chairs the House Appropriations Committee, has tried to rally conservatives to pass a package that would fund the government through next September and then—after the President’s executive actions are better understood—pass another bill that would rescind funding for programs designed to carry out the order. Congress has a Dec. 11 deadline to avert a government shutdown, something Republican leaders want to avoid after last year’s politically damaging shutdown.

“I want the new Congress to be able to start anew, fresh, to be able to set agenda,” said Florida Republican Rep. Mario Diaz-Balart, an immigration reform supporter who approves of the year-long measure. “What is not an acceptable, what is not a path forward what is not a solution is to shut down the government.”

Oklahoma Republican Rep. Tom Cole, a Boehner ally, said that while such a so-called “omnibus” government funding measure isn’t dead, the President is “certainly doing his best to kill it.”

Some conservatives have advocated for a short-term alternative that would push the spending battle into early next year when Republicans control both chambers of Congress. AlabamaRepublican Sen. Jeff Sessions, the incoming Budget Committee chairman, has pushed that strategy along with other conservatives and outside groups.

Roy Beck, president of the immigration-reduction group Numbers USA, told TIME that “any vote” to fund the Department of Homeland Security for “more than two or three months would be a vote in favor of the Obama amnesty.” Dan Holler, a spokesman for the conservative group Heritage Action, said in a statement Wednesday that Rogers’ plan doesn’t provide enough leverage for Republicans, as the President wouldn’t sign a rescinded bill to help Republicans defund his executive action.

Some Republicans and conservative commentators, like Erick Erickson of the website RedState, have noted that there was little longterm political cost to last year’s government shutdown. Republican poll numbers initially cratered, but the botched rollout of the health care reform law quickly shifted attention and Republicans recaptured the Senate this month for the first time since 2006.

“Turns out the public was a lot smarter than a lot in the political class and media class gave them credit for,” the Arizona Republican Rep. David Schweikert told Bloomberg on Tuesday. “They were able to discern that it was an honorable fight over many of the things that were rolling out in the new health care law.”

“It would be the President who would shut down the government if we passed legislation that fully funds the government with the exception of his illegal conduct,” Alabama Republican Rep. Mo Brooks said.

Besides possibly attempting to defund targeted agencies, Republicans may also sue the President over the executive actions. But a taxpayer-funded lawsuit could lose steam as it the cost rises and weeks go by—witness the dormancy of a House-pushed lawsuit over Obama’s administrative tweaks to the health law.

“There’s obviously legal challenges we can bring, but those take time and our base gets really frustrated because they think, ‘well all you can do is sue the guy,’” Stivers said. “Which may be true—we don’t yet, we’re really working hard to try and find options.” 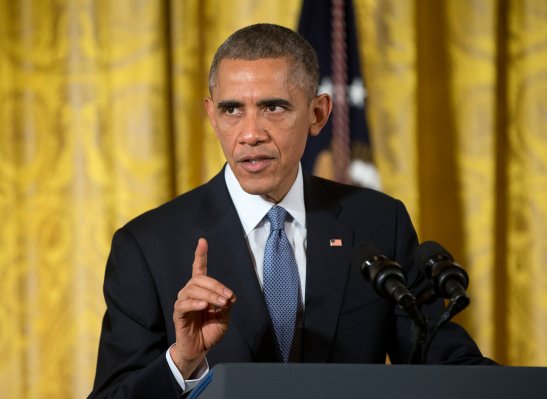 Nearly Half of Americans Oppose Obama's Impending Immigration Move
Next Up: Editor's Pick