In a video posted to Facebook, Obama said he would address the nation at 8 p.m. on Thursday. He will then travel to a high school in Las Vegas on Friday.

“What I’m going to be laying out is the things that I can do with my lawful authority as president to make the system work better even as I continue to work with Congress and encourage them to get a bipartisan comprehensive bill that can solve the entire problem,” Obama said.

White House Press Secretary Josh Earnest said Obama would host a dinner Wednesday night to discuss the executive actions with some Senate and House Democrats. And he said questions about the legality of Obama’s executive actions—the President has previously said it would be inappropriate for him to act unilaterally—would answered soon.

“There will be some material related to the legal justification… that will be released tomorrow,” Earnest said.

Obama announced in June that he would take executive action by the end of the summer, saying House Speaker John Boehner informed him the chamber would not take up the comprehensive immigration reform bill passed by the Senate in 2013. To assuage concerns of vulnerable Democrats, Obama decided to delay his action until after the midterm elections.

Congressional Republicans have threatened that unilateral action from Obama would poison the well for compromise in the new Congress.

“If ‘Emperor Obama’ ignores the American people and announces an amnesty plan that he himself has said over and over again exceeds his Constitutional authority, he will cement his legacy of lawlessness and ruin the chances for Congressional action on this issue—and many others,” Boehner spokesman Michael Steel said in a statement.”

“I think it would be a profound mistake for the President of the United States to use his executive authority to overturn American immigration law,” Indiana Gov. Mike Pence said.

An NBC/Wall Street Journal poll released Wednesday found that 48% of Americans oppose Obama taking unilateral action on immigration, while 38% are in favor, with the results largely breaking along party lines. 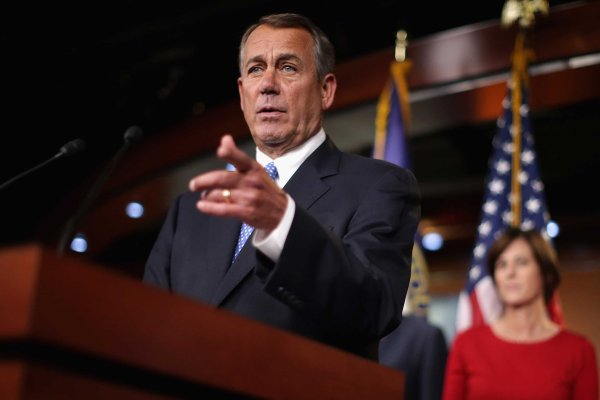 What Republicans Could Do if the President Acts on Immigration
Next Up: Editor's Pick