What Is Lake-Effect Snow? (Hint: It Involves a Lake)

A band of storm clouds moves across Lake Erie and into Buffalo, N.Y., on Nov. 18, 2014
Gary Wiepert—AP
By Jeffrey Kluger

You don’t need a meteorologist to tell you what lake-effect snow is: it’s snow that’s, um, caused by a lake, right? As it turns out, things are a teensy bit more complicated than that, and if you live in one of the states bordering the Great Lakes that are forever getting clobbered by the stuff — or even if you just marvel at the footage of the latest white-out to hit those luckless places — it can help to know what’s actually going on.

Lake-effect snow starts the way so much other winter misery does, with a blast of Arctic air descending on us from the north. Water temperature, even in the Great Lakes in winter, is generally higher than air temperature, since water retains heat longer than air does, and the long, slow warming from the summer months tends to linger. Sometimes the difference in temperature — what’s known as the lapse rate — between the onrushing Arctic air and both the water and the thin layer of local air just above it can be as much as 25ºF (14ºC). That gets things churning in a lot of ways.

For one thing, the air draws moisture from the warmer lake in the same way a hurricane will as it passes over the Gulf of Mexico, gathering in fuel in the form of heat and water. The Great Lakes water warms the Arctic air too, causing it to rise; the act of rising, in turn, causes the air temperature to drop right back down. But that cold air is now carrying more moisture, which condenses into clouds — and those clouds produce snow.

Cold air does not hold as much moisture as warmer air does, which means that lake-effect storms should be heavy but relatively brief. But a lot of things can change that. Air encounters greater friction as it moves over land than it does over water, which causes it to slow down and pile up as the higher-speed air streaming across the lake rear-ends the air that has made landfall, in the same way cars can on a highway collide when the driver in front hits the brake too fast. That intensifies any snowfall.

Elevation can make a difference too. Relatively flat ground adjacent to the lake will have a higher air temperature than hilly land; the colder the air is over those elevated regions, the greater the cloud formation and resulting precipitation.

What’s more, not all Great Lakes are created equal. The distance the Arctic air has to travel over water — what’s known as the fetch — changes depending on how the lakes are oriented. Since cold air moves roughly from the northwest to the east, Lakes Michigan and Huron and part of Superior — which are generally oriented north to south — require less of a watery crossing. Lakes Erie and Ontario and the eastern half of Superior are oriented more east to west, giving cold air more of an opportunity to pick up moisture. The direction of the air also means that cities that lie to the east of a lake get hit harder (we’re looking at you, Buffalo). But even a slight shift in winds means everyone takes the blast (hello, Chicago).

None of this makes a whit of difference when your city gets clobbered by a sudden blizzard. But if you can’t be a true New Yorker or Los Angeleno without knowing just which subway lines or highways to curse, you can’t really be a Midwesterner without understanding why you’re going to spend the next three hours of your life trying to dig your car out of 18 inches of snow. 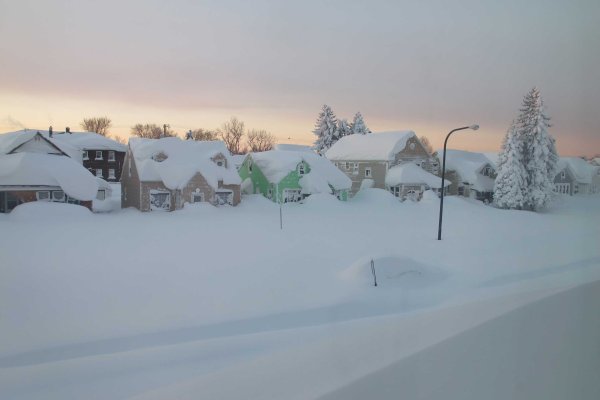 100-Plus Trapped by Monster Snow
Next Up: Editor's Pick